With the relatively one-sided affair between Cleveland and Cincinnati on Thursday night, the Browns emerged with a chance to be in first place. Pittsburgh’s loss on Sunday resulted in the Browns being all by themselves at the top. Some are actually quite surprised by this. I’m not considering that they have the personnel in place to compete in this league. The names are not flashy, but they have enough to beat average teams. We thought the Bengals were a better team and they looked horrible at home against Cleveland. Make no mistake there won’t be any chance of seeing Johnny Manziel this year unless Brian Hoyer goes down with an injury. After this year is a different story with Hoyer deserving of a contract extension, but do the Browns want to commit to him knowing they used a first round pick on Manziel. As for this season the Browns should remain in contention as long as there aren’t any unforeseen complications to their roster. One good thing is their best receiver, Josh Gordon will be returning very soon from suspension.

Quite The Nail Biter

Was Jimmy Graham really pushing off before catching the potential game winning touchdown as time expired? It sure looked like it in real time. You could make the argument in slow motion, but as it stood the referees had to make that call. It sucks, but they had to. Aside from a couple of mistakes by Drew Brees and a total defensive collapse on fourth down in the fourth quarter, the Saints had a great chance of winning this game. How the Saints let 49ers receiver Michael Crabtree get behind the secondary on that crucial 4th and 10 is beyond me. That setup the 49ers for the game tying field goal. New Orleans thought they had the game won with Jimmy Graham’s late touchdown grab, but that was ruled a penalty for offensive pass interference. Drew Brees fumbled on their second drive in overtime deep in their own territory. The result, a win for the 49ers with a field goal. Just when you thought the Saints had figured it out, they find a way to disappoint. Luckily for them the entire division they play in is awful this year. Finishing with an 8-8 record could get you the division and a home game in the playoffs. Pretty sad. 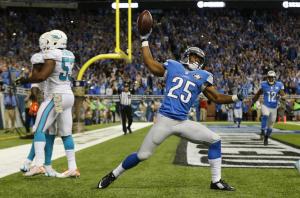 The Game Of The Week

Both Miami and Detroit have good defenses. Both have streaky offenses, but that doesn’t hurt them too much. They both capitalize on opponents mistakes. This was shaping up to be a pretty even matchup. It came down to the very end with the Lions winning the game on their final possession. Now this doesn’t mean that these two are guaranteed to be in the Super Bowl let alone make a playoff spot. Although if the playoffs started today Detroit would be in leading their division and Miami would probably need some help to get in. Regardless these two have looked to be the most consistent teams this season. Miami was a hot team coming in and the Lions were looking to pad their narrow lead. Miami could be a thorn in the side of the New England Patriots this year having already beaten them once. Detroit could actually be a watchable team when you’re sitting down eating your turkey. Good showing by both.