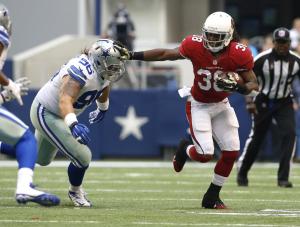 Sitting Atop The NFC

Not a bad place to be if your the Arizona Cardinals. They are sitting atop the NFC with a 7-1 record. Granted this doesn’t mean much now, but getting three more wins could almost guarantee them a playoff spot. That’s quite amazing considering the other teams in the conference we expected to be atop instead of them. Now this really isn’t that surprising when you realize the Cardinals won 10 games last year and didn’t make the playoffs. It’s essentially the same team and they are doing this with some injury concerns throughout the season. Namely their starting quarterback Carson Palmer missed a few games early in the season. A lot could change with the Cardinals having to play the 49ers one more time. They haven’t even played Seattle yet. The book is still out on them, but they control their own destiny.

Did anyone know that Peyton Manning and Tom Brady played against each other this past Sunday? That was a rhetorical question, but I found myself bored watching the first three quarters of that game. The game was over by the fourth quarter so I stopped at that point. If these two play each other in the playoffs, which is highly likely, I would imagine it would be a better game. It just seemed to me that Denver didn’t give a damn and the Patriots were just padding Brady and Belichick’s record against Peyton. Same old story when you look at the head to head matchup between the two quarterbacks. The NFL begs to differ and will hype the crap out of this as long as these two keep playing. That’s all good in well, but I’m starting to think this matchup is getting overhyped during the regular season.

Baltimore and Pittsburgh just don’t like each other. That isn’t new, but what is new has to be the attitude of the Steelers towards the end of the game. They were quite upset with Ravens DE Terrell Suggs and his apparent dirty hit from behind on RB LeGarrette Blount. I don’t remember the exact number, but there had to have been 3-4 personal foul calls since that hit was delivered. Most of the time when you watch these two play it’s a physical contest. Sure there will be penalties, but to see that many personal foul calls was a little surprising. Regardless the Steelers didn’t care. Most of the personal foul calls were against Baltimore, but the Ravens figured the game was in the bag for Pittsburgh. This was the last time they met for the season, but if they make the playoffs there could be more fireworks.