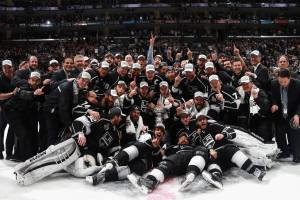 They were nearly swept in the first round. Their backs were against the wall with their crosstown rivals. And they had to defeat the defending Stanley Cup champions. Now imagine if the Los Angeles Kings had won the Stanley Cup last year. This would be their third consecutive Cup title and the first such feat since 1983 when the New York Islanders had finished off their fourth consecutive championship.

This was a well balanced team all season long, but they were prone to disappointing slumps. That showed when they were down 3-0 to the San Jose Sharks and then won four consecutive games to move on. With a 3-2 series deficit to the Anaheim Ducks the Kings won a nail biter at home in Game 6 and came out of the gates on fire for Game 7 in Anaheim. With Chicago it was a different story as they were ahead 3-2 in the series, but couldn’t put the Blackhawks away in Game 6. It was Alec Martinez who cliched the Kings spot in the Stanley Cup in Game 7 against Chicago and he put away the game winner in double overtime against the New York Rangers in Game 5 of the Stanley Cup Final.

If it wasn’t Justin Williams being named the Conn Smythe winner then it could have gone to Drew Doughty, Anze Kopitar or Marian Gaborik. It does make sense that it went to Williams. He has been labeled ‘Mr. Game 7’ due to the fact that he always manages to score a point in those types of games. His 9 playoff goals this year were a career high and being only 32 years old he does have a lot left in the tank.

This is a scary good team that doesn’t have any glaring holes to fill going into the offseason. Gaborik is the biggest free agent they have and they will need to think about extensions for Williams, Jarrett Stoll and Tanner Pearson who was a breakout player during their Stanley Cup run.

Even though Jonathan Quick didn’t have the greatest overall playoff performance he was solid when he needed to be. Especially against New York Rangers goalie Henrik Lundqvist. The Kings knew when to push the right buttons and it was amazing to see them recover from their mistakes. They’ll be the first to admit it and they’re just glad that it resulted in another Stanley Cup title.