A Sight To See

I usually don’t point out a particular teams fanbase very often, but in the case of the Buffalo Bills I’ll make an exception. Their charitable contributions in recent years have been legendary. Donating huge swaths of money to then Cincinnati Bengals QB Andy Dalton’s charity when they beat the Baltimore Ravens in the final game of the regular season. That Bengals victory allowed the Bills to clinch a playoff spot. Seeing Bills fans attend their first home playoff game since 1995 in the midst of the lockdown madness put a smile on my face. I was happy for them and they deserved it. The game itself was a good one. The Indianapolis Colts weren’t going to let Buffalo get an easy win. It looked dicey in the fourth quarter with the Bills leading 24-10. If Bills kicker Tyler Bass didn’t convert a 54-yard field goal the game would have been tied when the Colts trailed 27-24 with their last score. These two franchises used to be division rivals for decades. It was an old-school feeling watching it and having the fans there made it even better.

Usually when a team is struggling and their gameplan isn’t working, they make an adjustment or two to correct their course. That didn’t happen with the Seattle Seahawks when they hosted the Los Angeles Rams. It was clear that Seahawks QB Russell Wilson wasn’t going to have any time to throw the ball. Being sacked a total of five times for the game, Wilson was constantly under duress. Seattle was effective running the ball. They ran it 25 times with a 5.4 yard per carry average. They totaled 136 yards rushing and yet with the game being close at crucial times in the first three quarters, they kept passing it. It was mind boggling why Seattle kept throwing it. The Rams coverage units are among the best in the league and the Seahawks receivers were dropping passes as well. Sure the offensive coordinator deserves some blame here, but just like in Super Bowl 49 head coach Pete Carroll didn’t run the ball with Marshawn Lynch at the goal line. Why was he not making an adjustment during this game? The opportunity was there and they let it go right by.

To my surprise, but not totally out of the realm of logic, Washington scratched QB Alex Smith for their playoff game against Tampa Bay and started Taylor Heinicke instead. He’s had some experience previously with head coach Ron Rivera at Carolina. It made sense why this move was made given Alex Smith’s injury history and he was dealing with a calf issue late in the year. It looked as though the game was going to get out of hand in a hurry, but the Washington Redskins held up. When the 3rd quarter started they were down 18-7. At the end of the quarter they were only down 18-16. Their defense was the reason they made the game close for three quarters. Heinicke played well and kept the offense afloat for most of the game. Tampa Bay was too much for them and took over in the fourth quarter. Even though Washington played in an awful division they showed why they were the best team in it this year.

For the last two seasons the Baltimore Ravens had high expectations going into the playoffs and they floundered them with a loss in their first game. The main reason is that their opponents defense figured they would make Ravens QB Lamar Jackson beat them with his arm and not his legs. It worked and Baltimore couldn’t keep the ball long enough to mount a comeback. This year they learned that they must establish that running game no matter what and the Ravens defense matched that with stopping Tennessee Titans RB Derrick Henry. There were chances for the Titans to tie or pull ahead in the game, but questionable coaching decisions and poor play on offense led to the Ravens victory in the end. If the Ravens continue this kind of balanced attack they could be looking at a conference championship appearance in the near future.

A Win Is A Win

It wasn’t pretty, but a win is a win. The Chicago Bears proved that they didn’t belong here. Sure the defense did its part. The offense had opportunities including a dropped pass in the end zone by WR Javon Wims early in the game that would have given Chicago the momentum. New Orleans was clearly the better team, but they were stymied on a few drives and their kicker Wil Lutz has to find his groove again when they play better opponents. There are gonna be closer scoring affairs ahead and they need to shore up their gameplan for it. 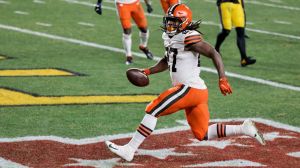 Just like with the Buffalo Bills fan base I have the same sentiments for the Dawg Pound in Cleveland, Ohio. They haven’t won a playoff game since the 1994 season. They were eliminated that year by the Pittsburgh Steelers. The last time they played a game in the playoffs was in the 2002 season. The Pittsburgh Steelers eliminated them then too. It was only fitting that they played the Steelers this time and from the first snap of the game the outcome was going to be very different. Steelers C Maurkice Pouncey launched the ball over QB Ben Roethlisberger’s head eventually ending up in the end zone and recovered by Cleveland for a touchdown. At the end of the 1st quarter the Browns were leading 28-0. I didn’t think the game was over because I’ve seen some crazy endings to games like this. Not even counting the ones in Cleveland’s history. Pittsburgh did start to make it a game in the 3rd scoring 13 points and being down 35-23. Momentum was shifting until Steelers head coach Mike Tomlin decided not to go for it on 4th down at midfield with the momentum they had and instead punted. The Browns then scored immediately on that drive and the game was essentially in the bag. Two things happened here. Pittsburgh proved that they were a flawed team. And the other was that Cleveland has the potential to make another upset happen in these playoffs.