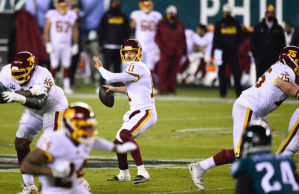 Looking At The Positive

I’ve spent plenty of time bad mouthing the awful NFC East this year. To change it up and focus on a positive, there is one good thing to come out of it. The fact that QB Alex Smith has returned to playing football after his gruesome leg injury in the 2018 season. To sum it up he suffered a broken leg with multiple ligament tears. The break was so severe that a bone was protruding from the skin and eventually caused a nasty infection that almost cost him his life. That’s the reason he’s been out of football for almost two years. I’ve always liked Alex Smith. Even with my Niners drafting him over Aaron Rodgers in the same draft. Hindsight aside, Smith isn’t a terrible quarterback. The debate about him being the number one overall pick I won’t argue with, but that’s beyond the point. The Washington Redskins would not be in the playoffs if he wasn’t their quarterback this year. With the division being so bad this year his record as a starter was 5-1. Yes, two of those wins came against NFC East opponents, but a win is a win. And one of his wins was against the then undefeated Pittsburgh Steelers. Regardless of his statistical numbers, which aren’t good, he is the Comeback Player of the Year. There is no doubt about that. Simply remarkable. 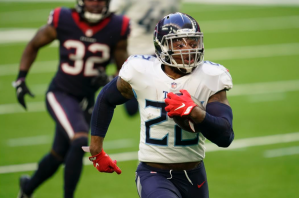 I knew he wasn’t that far away from the 2,000 yard rushing mark. Before their Week 16 Sunday night game against the Green Bay Packers, it was mentioned that Titans RB Derrick Henry was 348 yards away from it. Not crazy to think that he could do it in their final two games, but he finished with only 98 yards rushing against the Packers. He needed to rush for well over 200 yards against the Houston Texans for the final game. Again, not a stretch considering the Texans defense has been pretty bad this season. Sure enough he did it, rushing for 250 yards and adding two rushing touchdowns to boot. It helps that he was given the ball 34 times to do it, but he did it regardless. In 2017 and more in 2018 I wrote many times about how the Titans needed to get him the ball more and have him as their feature back. It wasn’t a fluke why he won the Heisman Trophy at Alabama in college. Tennessee had a different head coach in 2017, that being Mike Mularkey. Their current head coach Mike Vrabel came aboard in 2018 and that’s when it finally began to change. This guy has been great the last two seasons and he’s only 26 years old. Expect him to keep doing this going forward.

Learn From This Lesson

The Miami Dolphins will have a long offseason to learn that you can’t take any weeks off during a 16-game season. Their loss against the Denver Broncos in Week 11 will loom large for them as Denver finished with a 5-11 record this season. Another team that needs to learn this lesson are the Arizona Cardinals. However, the bigger lesson for them is to have a balanced offense going forward. They had many problems on defense, but that wasn’t the most glaring issue as the season progressed. Before their by week they were 5-2. QB Kyler Murray was being talked about as a MVP contender. Then the Cardinals finished the season 3-6. The defense gave up an abundance of points, but the offense was stagnant for quite a few of those games. The first was against New England in Week 12 where Kyler Murray played his worst game of the year at that point. They did manage to win two games against NFC East opponents in Weeks 14 and 15, but the offense played their worst games for the final two. They were out-gained by the 49ers in Week 16 by almost 50 yards and were 4 for 16 on 3rd down conversions. The next week wasn’t any better as Kyler Murray left with an ankle injury and the offense was completely lost. He did return in the end, but it was too late. Arizona had only 214 total yards and couldn’t get more than 50 yards on the ground. Most of that is due to Murray being their second leading rusher for the season at 819 yards. This is going to be a problem for this team with Murray as their quarterback. He’s done a good job avoiding the big hits, but make no mistake he is getting hit. Head coach Kliff Kingsbury has a good thing going in the desert, but he could squander it if he’s not careful. They need to have balance on offense to avoid this kind of meltdown at the end of the year.