Yes, I did predict the Kansas City Chiefs to be in the Super Bowl before the start of the season. I didn’t have them winning, but they are there. After their Week 10 matchup against the Tennessee Titans this season I said, “The Kansas City Chiefs will never win a Super Bowl with a defense they currently have right now.” That was when their offense clearly did enough to beat the Titans, but the Chiefs defense couldn’t stop Derrick Henry who amassed 188 rushing yards en route to a victory for the Titans. Fast forward to this past Sunday with these two going at it again for a berth in the Super Bowl. This was in Kansas City instead of Tennessee, but it started out in the Titans favor. They were up 17-7 with 6:30 minutes left in the first half. It suddenly became a 21-17 lead for the Chiefs at halftime. Tennessee then did something I didn’t expect them to in the second half and that was panic. Their offense sputtered. They just about abandoned giving Derrick Henry the ball who only had 19 carries for the game as opposed to the 30+ in their two previous playoff games. All credit goes to the Chiefs though who didn’t let up as they added two more touchdowns in the fourth quarter including a patented Patrick Mahomes 60-yard bomb to Sammy Watkins. Kansas City needed to play their best overall game to get to Super Bowl 54 and they did. It also proves that they can’t be counted out of any game no matter the score. 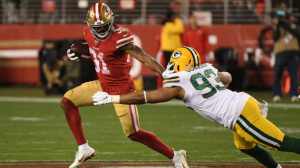 Go With What Got You There

If it ain’t broke, why fix it? The San Francisco 49ers have been a stellar team all season. That is a credit to their defense and their rushing attack which are both among the best in the league all season. What no one expected to see is a guy by the name of Raheem Mostert run for 220 yards and 4 touchdowns when all was said and done. If you haven’t been paying attention this season, seeing a guy like Mostert do what he did is a testament to the 49ers depth. Their starting running back Tevin Coleman exited with a shoulder injury, but at that point it was the next guy up. They’ve had injuries along their offensive line and at key positions on their defense as well. Yet, they still finished with a 13-3 record and absolutely played to their strengths in both playoff victories. Green Bay played a predictable game and had no way of getting around those picture perfect blocks by the Niners. Jimmy Garoppolo only attempted 8 passes the entire game. Two of those in the second half. He’s a solid quarterback and he has plenty of options to throw to, but why would you deviate from the rushing attack? Collectively they ran for 285 yards. Don’t expect anything different in two weeks unless the Chiefs figure out a way to stop it.