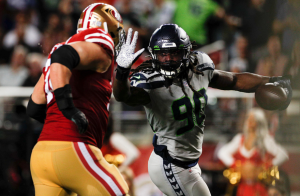 Game Of The Year

It took a little over half the season, but we finally got a game that was worth the hype. The 49ers were coming into the Monday night matchup undefeated and looking to keep their division rivals in the Seattle Seahawks at bay. Both defenses had touchdowns and at dramatic moments in the game. The favorite to win the MVP award right now, Russell Wilson was solid, but did have a bad interception in overtime that could have costed Seattle the game. The biggest flaw with Seattle remains in their offensive line. Their defense isn’t what it used to be, but if Jadeveon Clowney can keep this play up then they’ll be fine. San Francisco had the opportunities to put the game away. A missed game winning field goal in overtime and two big drops by Kendrick Bourne (one that led to an interception) didn’t help matters. I didn’t expect the Niners to remain undefeated, but if they won this game it would have silenced a lot of doubters. There still shouldn’t be any as this was a great game from start to finish. 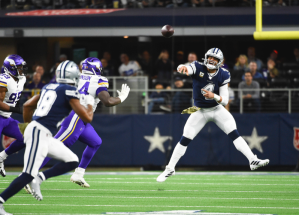 Minnesota jumped out to a 14-0 lead and the groaning of Cowboys fans was heard all over the country. I for one didn’t expect them to just lay down and sure enough they made it a game the rest of the way. That is until Tavon Austin didn’t run for an additional 10-15 yards on a punt return for the last possession. Regardless Dak Prescott is still showing that he is the Cowboys best chance at staying in contention this year and for the future. The chemistry he has with Amari Cooper is something to see. On the other side with the Vikings, Kirk Cousins isn’t among the best quarterbacks in the league, but he put in a good showing on a national stage. When Adam Thielen is healthy to go along with Stephon Diggs and Kyle Rudolph, it’s a solid trio to work with. That offensive line is much better this year and having Dalvin Cook in charge of the ground game helps as well. If Monday night’s game didn’t end up the way it did, this would likely have been the game of the year so far. 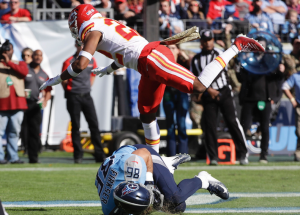 I’m just gonna go ahead and say it. The Kansas City Chiefs will never win a Super Bowl with a defense they currently have right now. They almost out-gained the Tennessee Titans by 200 yards. Patrick Mahomes threw almost 300 yards more than Ryan Tannehill. Kansas City had the ball for over 37 minutes to Tennessee’s 22 minutes. How the hell did the Chiefs lose this game? Yes, Mahomes did fumble the ball at a crucial time that resulted in a Titans score. There was a botched snap on a field goal attempt and the potential game-tying field goal was blocked. Yet, if the Chiefs defense had just kept Derrick Henry under 150 yards rushing instead of the 188 he amassed, you’d probably have a victory. With such a potent offense at their disposal it’s gonna be sad to see them have another disappointing ending in January.

One thought on “Week 10 Review of the NFL”