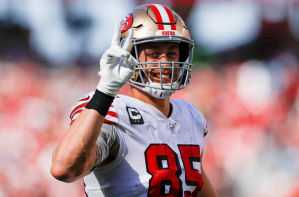 We have arrived at the halfway point of the NFL season. Here’s a brief rundown of who are contenders, outsiders and are planning for next season.

They’ve only allowed 61 points in their eight games and this is without Tom Brady playing at his best. I don’t think they will finish with an undefeated record, but they certainly will get home field advantage.

Their defense is the main reason why they are in this spot. While their quarterback Josh Allen has yet to have that breakout performance, they will be a contender for a Wild Card spot.

They have a dynamic quarterback in Lamar Jackson who seems to get better every week. Their defense seems to be getting better and their 3-1 road record bodes well for them going forward.

I didn’t think this would have happened with Andrew Luck’s retirement, but here we are. They haven’t lost to a divisional opponent and Jacoby Brissett has been fantastic.

Even with the loss of J.J. Watt on defense this team is counting on their quarterback Deshaun Watson to win games for them. That’s a good sign for them.

Sure they’ve lost three out of their last five games, but Patrick Mahomes will be back soon and that will reinvigorate this team who is 4-0 on the road.

They’re on this list mainly because they are the best team in their division. They haven’t lost to a divisional opponent, but that loss to the New York Jets is going to haunt them.

I think Aaron Rodgers is finally figuring out that he doesn’t have to do it all. Aaron Jones is quickly becoming a great all-around running back and that defense has a lot of bright spots.

They have a perfect record at home (4-0) and five of their wins have come against conference opponents. Kirk Cousins has been on fire. What’s not to like?

I didn’t think the season would be lost with Drew Brees being out with a thumb injury, but I didn’t expect them to not lose a single game without him. This team looks down right scary.

There is no denying it. This guys are here to stay. With the pressure that defense puts on opponents and the rushing attack they boast. You’ll have to play a perfect game to beat them.

Russell Wilson is the MVP right now. That could change, but Seattle would not be in this position if he wasn’t around.

After their losses to Tampa Bay and San Francisco at home I was about to put them on the outside. However, with the addition of Jalen Ramsey to that secondary, the outlook and attitude of this team has changed for the better.

Before their blowout loss to the Niners they would have been in the contender category. Seeing how they still need Cam Newton to be healthy tells me they’re just outside.

I’m tired of scratching my head trying to figure this team out. They have a great defensive line, but the rest of that defense is so inconsistent. What happened to Carson Wentz and when will he return to his 2017 form?

If they had lost to Chicago they wouldn’t be in this category. With that victory they are still alive in a contentious AFC for a Wild Card spot.

This spot could change for them depending on their next three games. If they beat Detroit, the LA Chargers and Cincinnati then they’ll be in a great spot. It seems doable being that those three games are at home.

Obviously if they let the Miami Dolphins beat them at home there’s no way they would be here. Mason Rudolph returning helps them a lot and they need to keep giving James Conner the ball as much as possible.

Start Planning For Next Year

Dysfunction doesn’t even begin to describe this team. It looks like you shouldn’t have even signed Le’Veon Bell. You fired your previous GM over that. Adam Gase doesn’t have a gauge on the current crop of players and you’re alienating your best player in Jamal Adams. What a disaster.

Before the first snap of this season they were already planning for next year.

I’m guessing that naming Freddie Kitchens as the head coach was a mistake. Does anyone know what’s going on with this team?

The Andy Dalton era is over and this has the makings of a total disaster. If they fire Zac Taylor after only one season then it will be confirmed.

Yes, they’ve salvaged what could have been a lost season with Nick Foles’ injury. But you traded Jalen Ramsey and are still wildly inconsistent from week to week.

The offense seems to be better with Ryan Tannehill at quarterback, but that win against Tampa Bay last week was painful to watch. If the wins continue then they certainly will be elevated, but I don’t see it lasting.

The way Joe Flacco was talking about the play-calling this last week has me thinking he doesn’t want to be there after this season. Which was gonna happen regardless of how this season went.

I don’t take back anything I said about Daniel Jones and his future with the Giants. This team outside of Saquon Barkley isn’t fun to watch.

It became a lost season with the firing of Jay Gruden. Now if Dwayne Haskins continues to struggle with his opportunities this year that’s a bigger problem for them going forward.

I want to see Detroit succeed, but apparently no one else does. Yes, you got hosed in that Green Bay game, but your tie to Arizona and losing late to Philadelphia, Kansas City and the butt whopping to the Vikings doesn’t help your case.

This isn’t all on Mitchel Trubisky. What the hell is happening to the play-calling in Chicago? You can’t tell me that taking a knee with just under a minute to go was the right move when you had one timeout remaining to get a little closer for your kicker.

Tell me why did Bruce Arians come out of retirement to take this job?

I’m gonna go ahead and say it. They’ve never gotten over that 28-3 lead in the Super Bowl.

That offense is looking good at times. It isn’t a game changer, but if they get a few pieces it could be great. That defense is still going to be their downfall.