They’re Still In The Hunt

Even though the Atlanta Falcons were able to sack Cowboys QB Dak Prescott 8 times, it doesn’t mean that they now have the same kind of defense from a year ago. They have struggled most of the year to get a consistent pass rush. This is a good boost for them, but they need to be more consistent. They didn’t have their best offensive performance of the season either, but they did consistently run the ball which will help them in the long run. This win keeps the Falcons in contention. Now they just need to work on defeating their division rivals.

There’s A New Target In Pittsburgh

12 catches, 290 yards and 2 touchdowns. Usually that is the stat line for Steelers WR Antonio Brown, but that has been the stats for rookie WR JuJu Smith-Schuster in the last two games. He has outplayed Martavis Bryant and is taking advantage of single coverage opposite Brown. This should bode well for QB Ben Roethlisberger who has struggled at times this year with the interceptions. The field should be opening up a lot more for him with Smith-Schuster, Brown and Le’Veon Bell in the backfield as well. Look for more big games the rest of the way. 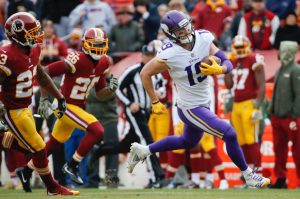 He has 56 catches for 793 yards. You probably wouldn’t think those stats belonged to Minnesota Vikings WR Adam Thielen. Well, they do in fact. He scored his first two touchdowns of the season in his last two games, but the most amazing stat with him is that he has had at least 5 catches in every game he’s played this year. He’s not the fastest guy in the league, but his size and route running are impeccable. Even more amazing, he was undrafted in 2014. His breakout season was last year, but he is on pace to shatter that. You wouldn’t have expected it coming from him with Case Keenum as his quarterback for most of the season. Yet, they are both enjoying career years together. Minnesota has a keeper at receiver.