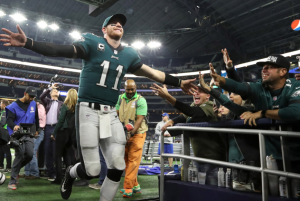 It Shouldn’t Be This Easy

Most Eagles fans, well the honest ones, would have told you that their favorite football team would fail at some point this season. In the midst of an eight game winning streak and a 9-1 overall record that isn’t the case. The only reason that I can come up with for the lack of a dramatic disappointment is with their quarterback, Carson Wentz. Turns out that every draft pick Philadelphia traded away at the time to get Wentz in 2016 was a stroke of genius. He has a thrown a touchdown pass in every game this year and has three 4-TD performances this season. Odds are he is the favorite for MVP with a 25-5 touchdown to interception ratio. He’s making this look too easy and it really isn’t.

Remember The Panic Back In September?

I certainly remember all of it and wondered what the hell was wrong with everyone? This isn’t the first time the Patriots have done this. Started out slowly and eventually figuring it out, thus reassuring everyones hopes of seeing Tom Brady possibly hoist another Lombardi trophy. New England has a six game winning streak going for them and they are not allowing their defense to get outworked on a weekly basis. They made one simple adjustment after their 2-2 start. Control the ball by running the ball more. They have what seems to be an endless amount of running backs at their disposal and they’ve used them all this year. Brady is still doing his thing in the pocket and it looks like we’ll most likely see New England clinch another first round bye before Christmas.

There’s Something You Don’t See

Not being able to watch every single game has its disadvantages, but thanks to the internet, I can watch the actual highlights of the game instead of talking heads whose opinions I could care less about. With that in mind, I wish I was able to watch the Redskins and Saints going at it. Washington had them. They just scored again with 5:58 left in the game and were up 31-16. Game over at that point, right? Not for Drew Brees and the Saints. They scored 15 unanswered points to tie the game and eventually won it in overtime. It still amazes me that an NFL team knowing exactly what the other team is going to do still allows it to happen. That makes it eight straight victories for the Saints who are playing like they haven’t missed the playoffs in the last three years.