A Football Game To Be Proud Of

This season in the NFL has been boring to say the least. Finally there was a game that actually kept me going from beginning to end. The key there is from the opening kickoff to the final whistle. Some games start off good, but trail off. While others get interesting at the very end. Both Dallas and Pittsburgh had many chances and opportunities to pull ahead. The Steelers did so with a fake spike by Ben Roethlisberger who threw a touchdown pass to Antonio Brown. Dallas followed that up with Ezekiel Elliott running away with the final touchdown of his impressive day. The Cowboys are still winning and becoming a legitimate contender while the Steelers had yet another setback in an otherwise disappointing season.

The NFC Is On Notice

Not many teams could do what Seattle did and that’s beat the Patriots at home during a primetime game. I can’t quite figure out this team after all these years. They are obviously talented at many key positions and yet, they always seem to disappoint you when you least expect it. This wasn’t the case in New England where Russell Wilson was the better quarterback, not Tom Brady. Seattle’s defense slowly began to frustrate, as they do often, the Patriots offense. The Seahawks have their flaws like every team does. Going forward they are starting to close the gap on those flaws and make the rest of their opponents think twice about playing them come January. 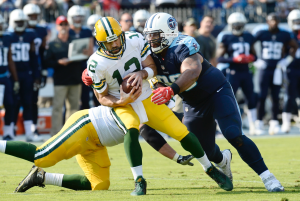 It certainly might be that time. This isn’t solely on Aaron Rodgers shoulders, but he hasn’t looked great at times this season. Nor is it solely on the defense’s shoulders either. But a good chunk does rest on them after that thumping they were given by the Tennessee Titans. It wasn’t the most prolific offense in the league, yet they scored 47 points on the Packers. All but twelve of those points were scored in the first half. Green Bay’s defense has allowed 30 or more points in four of their last five games now. The only saving grace for them is that they are playing in a rather weak division this year with Minnesota and Detroit only ahead of them by one game. Their schedule doesn’t get any easier. They’ll have to remedy this problem in a hurry.