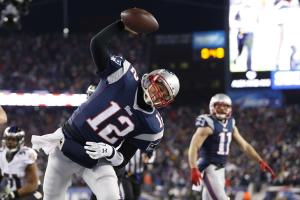 Whether Baltimore Ravens head coach John Harbaugh wants to admit it publicly or not, he was out coached by Bill Belichick of the New England Patriots. By me saying that doesn’t mean that I’m going to gravel at the feet of Belichick. There are quite a few things about him that I don’t like. His arrogance both on and off the field has gotten the best of him. The way he handles press conferences is only matched by Marshawn Lynch. However, for Harbaugh to cry fowl about a play in which the Patriots only had four offensive lineman on the field with another player reporting as ineligible, granted at the last moment, is pretty rich to me. It is part of the rules. Sure, arguing the point for it to be taken away in the rulebook during the offseason is fine, but to bring it up as a kind of unwritten rule thing is pretty petty to me. Baltimore had many opportunities to put this game away. Having Joe Flacco throw an interception was a bad move. Playing poor defense in the second half was a bad move. The Patriots made plays when they needed to and that was all. It’s beginning to be a theme for the Patriots. They need to cash in with these opportunities now.

It Could Be A Repeat

They could be just as good if not better than they were at this time last year. Seattle was being kept at bay by Carolina until the second half began and then the Panthers lost any momentum they had. The Seahawks seem to lull you to sleep at times and then they strike with a big turnover or a big play that sets them up for a touchdown. That’s pretty much what they did in the second half with Carolina. The Panthers thought they had them contained until Russell Wilson made a crucial pass play or Marshawn Lynch broke off a big gain. When Kam Chancellor intercepted Cam Newton for that touchdown you could already see the headaches their next opponent would be going through having to play in that stadium. Make no mistake that the Seahawks are vulnerable, but it’s just a matter of if that opponent can play a perfect game to beat them.

Another What Could Have Been Moment

There has to be one every week in the playoffs. Coincidentally it has been when the Dallas Cowboys are playing. Last week was the no-call for pass interference that Dallas got away with against Detroit. This week the tables were turned with a challenged catch by Dez Bryant. Green Bay said it wasn’t a catch and thanks to the insane rule in place, the call was overturned. At that point for me the life was sucked out of the game. It was a 4th down play and the ball went to the Packers who didn’t let the Cowboys get the ball back. Game over at that point. I only wish that the referees could keep themselves out of the results of a game, but this wasn’t all on them. The Packers had to challenge that play and they succeeded. The Cowboys certainly could have won if DeMarco Murray hadn’t fumbled earlier in the game. And if Dallas’ defense could tackle maybe Davante Adams wouldn’t have scored an easy touchdown. It couldn’t be put on this one play, but it’s hard not to say that. Green Bay now has a tougher task in beating the defending champions in the northwest.

It Shouldn’t Surprise Anyone

I was saying that if any other AFC team could beat the Denver Broncos in the playoffs besides the New England Patriots, it would be the Indianapolis Colts. It’s for one simple reason; QB Andrew Luck. He did throw two interceptions, but when the Colts needed to score they got it done thanks to Luck. This shouldn’t surprise anyone that the Colts won this game. There wasn’t a running game to speak of for the Colts, but Dan Herron was doing just enough to get by. Andrew Luck has reliable targets in T.Y. Hilton, Dwayne Allen and Coby Fleener to give defenses fits. This could be a changing of the guard with Peyton Manning going down this early in the playoffs. I don’t think he will call it a career, but he is certainly getting to a point where it will be year-to-year if he decides to retire. He has two years left on his contract with Denver and I don’t see him leaving from that commitment. The Broncos have some issues to work out now on the offensive side of the football, but they shouldn’t be counted out yet until Peyton decides to leave. The Colts should be a tough opponent for New England, but we know how that usually goes with the road teams in Foxboro.