If you follow me on Twitter, after every Sunday night game I post who had the best, worst and ugliest performances of the week. It’s a twist on an old Clint Eastwood western called “The Good, The Bad and The Ugly”. With the conclusion of the 2014 NFL season I will conclude my final weekly review of this season into three categories; the Good, the Bad and the Ugly. Brief and to the point I will look at the most talked about moments of the season before we delve into playoff mode. 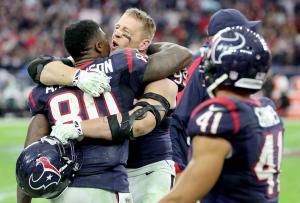 There should be some praise to a few players who stood out as among the best and will undoubtedly be stars in the NFL for the foreseeable future. J.J. Watt will most likely win another defensive player of the year award for his second 20+ sack season. He’s the only player in NFL history to do that. Justin Houston of the Kansas City Chiefs also had 20+ sacks and will be looking to cash in come spring. Odell Beckham Jr. of the New York Giants wowed us with his spectacular catches in only 12 games played this season. His attitude could use a little adjustment with his on field antics, but his talent is 100% legitimate. He will be the offensive rookie of the year. The Dallas Cowboys might actually live up to their hype the way they played this year. The Seattle Seahawks could repeat as Super Bowl champions and we will most likely see a Denver vs. New England AFC Championship game in January.

The New York Jets, Atlanta Falcons, Chicago Bears and San Francisco 49ers all made head coaching changes once the season ended. New York and Chicago also fired their general managers and look to make a lot more changes in the near future. The most talked about head coaching change has been the one in Santa Clara, California. It really has been talked about all year long sadly. The 49ers and Jim Harbaugh mutually parted ways without any ill will towards one another which is rare this day and age. “Philosophical differences” was the reason Jed York (pictured above right) decided to let Harbaugh go. Jim in turn found a new home by taking the head coaching job at his alma mater, Michigan University. York essentially is looking for the next Bill Walsh, which I say as a 49er fan, good luck. You won’t find another. There are plenty of great coaches out there and while I didn’t like how all the blame seemed to be put on Harbaugh’s shoulders, he does deserve some, you’ll be hard pressed to find a better coach than him for this team. Harbaugh was loyal to a fault with some of his players and that gave others a chance to question the decision making. Regardless it will be an interesting offseason for these four teams looking for new voices.

The only good thing about having Ray Rice and Adrian Peterson dominating the off-field headlines for the NFL this year is that it put the insanity of changing the Washington Redskins nickname to the back burner. With that said I’m not putting what Rice and Peterson did in any less of a light than they’ve already done themselves. Roger Goodell looked really bad too with his constant denial of not knowing that Ray Rice had in fact beat his now wife in the elevator. But as we all know when we first saw him dragging his wife out of the elevator, she was knocked unconscious by Ray Rice. Did we really need to see the video from inside the elevator to know that? Come on Roger. As with Adrian Peterson I don’t know why you need a stick or ‘switch’, whatever the hell you want to call it to discipline your son. Call me crazy, but there might be better ways to go about discipling kids. I don’t know why the NFL has to be the judge, jury and foreseer of all things right with society. If the justice system doesn’t want to deal with them, so be it. Demand that no one be able to accept plea deals then. That’s how this gets adjudicated in the courts. Why does the league have to step in when an actual judge already ruled on the case? Justice certainly can be misrepresented, but I’m willing to let customers money be the deciding factor of whether or not the league should get involved in these cases. Let Rice and Peterson play and see if the fans show up. The reason why they were punished so severely by the league is that the league knows the fans won’t show up to watch them play. Lets hope that Roger Goodell doesn’t stumble again in the future and players actually think before they act. I doubt both will come to fruition.