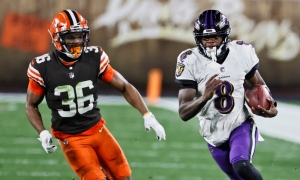 Unless you saw it for yourself or watched the highlights, you would never have guessed that Baltimore and Cleveland would combine for 89 total points on Monday night. It did happen and I couldn’t believe what I was seeing. The Ravens began to pull away in the 3rd quarter with a 28-14 lead and then it became 34-20 by the end of it. The Browns, not to be outdone, rallied in the 4th quarter and took the lead 35-34. This was without Ravens QB Lamar Jackson who had cramps and was in the locker room. Then he returned on a 4th and 5 with just under 2 minutes left to throw the go-ahead touchdown to WR Marquise Brown. If that wasn’t enough the Browns answered that with a frantic drive that took less than a minute to tie it at 42. Baltimore had enough time with Jackson to get within kicker Justin Tucker’s range to nail a 55-yard field goal to win. Most Monday night games have been pretty dull for years, but occasionally we get one like this. I’m certainly happy that was the case with this one.

If there was any doubt about the Buffalo Bills, look no further than the domination they laid out against the Pittsburgh Steelers. The problems for Pittsburgh are larger than ever with their second straight loss. They are still formidable with that defense and the chance that QB Ben Roethlisberger gets on a hot streak. However, if they can’t run the ball effectively they get complacent in the passing game. Not to mention their receivers dropping too many passes at inopportune times. For the Bills this showed that they can play well against a formidable opponent. I would love to see them matchup with the Kansas City Chiefs at some point. QB Josh Allen is a good quarterback. He is taking that next step before our eyes and he will only continue to get better. The Bills defense has been solid under head coach Sean McDermott and showed the country in primetime.

I didn’t think that Kansas City Chiefs QB Patrick Mahomes would look bad at any point this season, but his performance against Miami was his worst by far. Throwing 3 interceptions is a lot for him, but two of them were completely on him. No way he should have thrown those. Yet, with the bad game the Chiefs are just too damn good. Miami had a 10-point lead, but then gave up 30 unanswered points in the 2nd and 3rd quarters. The Dolphins made the most of the opportunities they had. It just wasn’t enough with the talent at the Chiefs disposal. Let it be known that even when Mahomes has more interceptions than touchdowns, Kansas City is still the best team in the NFL.