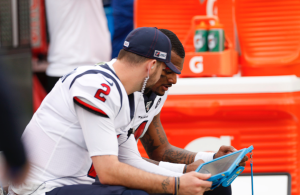 Back To The Drawing Board

It was a weird game for the simple fact that the Houston Texans should have had a blow out victory over the Tampa Bay Buccaneers. Instead it was down to the wire with Bucs QB Jameis Winston throwing another interception to seal their fate. Houston ends up winning the AFC South, but they must address a lot of concerns to avoid another early playoff ouster. Their pass rush has been missing in action, but should get a boost with the return of J.J. Watt. Deshaun Watson has done everything that’s been asked of him and then some, but there are too many times when the offense has become stagnant. This should be a time to celebrate, but there are too many question marks going into the new year.

They’re Setting You Up

The media in generally is trying to set you up. Lulling you into thinking that this won’t be another typical year for the New England Patriots. In fact it is the same kind of season for them and more with the possible punishment for the franchise being caught filming an opponent the week before they’re supposed to play them. How has that story been buried the last couple of weeks? Anyways you started to think that the Buffalo Bills could make it interesting and pull off an upset in Foxboro a week after their big win in Pittsburgh. It was a close contest, that is until the Patriots realized who they were playing and stepped up to put an end to any upset. Their offense isn’t the same anymore and that becomes more glaring when they face better opponents. If they make it to the AFC Championship game again and face off against the Ravens in Baltimore, don’t say they can’t win because I’ve seen this song and dance many times before.

It Was A Massive Failure

The defending NFC champions will not be a playoff team this year. Normally I wouldn’t say much about this kind of thing, but with the talent the Los Angeles Rams boasted this year I have to mention it. They had three blowout losses and all of them were at home. The 49ers, Buccaneers and Ravens all destroyed them in their respective matchups in the Coliseum. The Rams this past Saturday looked to have figured out how to stifle the Niners at their home field, but their early lead quickly eroded. That pick-six that Rams QB Jared Goff threw just before halftime perfectly sums up the Rams season. He is not the same quarterback from a year ago. Their offensive line was in shambles for the first half of the season and Todd Gurley just isn’t the same running back anymore. Their defense had some bright spots, but get ready to be in cap hell. You traded for CB Jalen Ramsey and he wants to get paid as the top cornerback in the NFL. You also have Dante Fowler that will want to be paid as well. A lot of money is tied up to quite a few players and some tough decisions are at hand. If it wasn’t for the Cleveland Browns, I’d say this was the most disappointing team of 2019. Good luck sorting it all out.