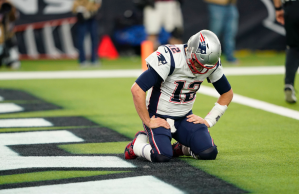 All the memes about how Tom Brady is an old man are pretty funny, but if you think for a moment that the New England Patriots won’t be contenders for the Super Bowl this year, you’re kidding yourself. This was only their second loss of the season and while it was worse than their loss to the Baltimore Ravens, they are still coached by Bill Belichick. He is a master of adjustments and this team still has a solid defense that has carried them for most of the year. When you look at the Patriots offense, Brady only has two reliable targets; Julian Edelman and James White. That’s it. They aren’t running the ball consistently to take away that weak point in the receiving corps and also not having Rob Gronkowski is a glaring problem as the season has progressed. In all likelihood they will win the AFC East, but it doesn’t bode well for them getting home field if the Ravens keep winning. Don’t think for a second that this team is done. It ain’t over until they actually lose a playoff game in January.

We Got What We Asked For

Both teams traded big plays on offense in the first half. Then it became a stalemate in the second half as each teams defense’s showed how good they are. This was a game that should have been flexed to primetime, but alas Fox wasn’t gonna give this up. Could it have been moved to the afternoon time slot? It certainly should have. While I believe the Seattle vs. San Francisco Monday night game is still the game of the year, this matchup between the 49ers and Baltimore Ravens was a good contender for that top slot. A last second field goal to win the game for the Ravens was the icing on the cake. Rarely do I ever say that a game was great from beginning to end. This is one of those times. Watch the highlights and tell me otherwise. 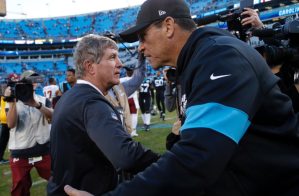 ‘Another One Bites The Dust’

It’s a bit ironic that the Washington Redskins who had already fired their head coach Jay Gruden over a month ago ended up beating the Carolina Panthers, who in turn fired their head coach Ron Rivera the next day. It seems like Rivera had been there for quite some time. His first season was in 2011, the same for Cam Newton. Being the head coach for 8-1/2 seasons means that you had some good stretches along the way and that was the case with four playoff appearances. Three straight from 2013-15, including a Super Bowl appearance in 2015. Carolina had been 15-1 that year with arguably their most talented team in franchise history, but didn’t have anything to muster in a Super Bowl rout to the Denver Broncos. It has gradually been a fall for the Panthers with only one playoff appearance since and with a new owner in place (David Tepper), a change was going to happen. The one thing that Rivera couldn’t solve during his tenure was keeping his quarterback out of the grass as he was sacked at least 33 times from 2011-17. In 2018 he was sacked 29 times playing in only 14 games. Cam has only played in two games this season due to a Lisfranc injury in his foot. His tenure might be over as well with Carolina looking to rebuild and change its personnel. Ron Rivera is a solid coach and he should be a hot commodity with more openings expected at seasons end.