They Proved It Again

I was expecting a good game, but didn’t think it would be a one-sided affair. The complete domination by the 49ers against the Green Bay Packers started on the first possession when Aaron Rodgers fumbled. From there it became quite apparent who the better team was. Mind you the Packers entered the contest with a 8-2 record. Their flaws were exposed and they couldn’t find any cohesion on offense. All the credit goes to the 49ers defense and their offense put up points when needed with many big plays. If you’re still doubting the Niners, please go back and look at the tape and tell me otherwise.

This Is What’s Wrong With The Cowboys

This shouldn’t surprise anyone who has watched football regularly since Jerry Jones purchased the Dallas Cowboys. Yet, the talking heads somehow think they know what’s wrong with the Cowboys; Jerry is the problem, they don’t have a quarterback, their defense is terrible. I am not one to pile on Jerry Jones. He is going about his business which is the team in a way that almost everyone would. He wants to win and by just about any means necessary. The problem with the Cowboys has been the head coach. Jason Garrett really showed his worth by kicking a field goal late in their game against the New England Patriots rather than going for a touchdown when you’re down by 7 points. The logic is just mind boggling. He has never impressed me since being the head coach and someone else will be the one to bring them back into Super Bowl contenders. They’ll probably win their division this year because it’s been terrible, but that shouldn’t save him unless they do win the Super Bowl. Chances are that he’s gone at the end of the season. 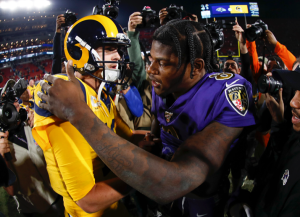 Without A Doubt, He’s The MVP

I liked watching Michael Vick play. The same goes for Tim Tebow. Both of them had questions about them being NFL quarterbacks. They both had success to varying degrees. That’s why I was still surprised that doubts were being discussed about Lamar Jackson being a quarterback in the NFL. There have been great quarterbacks before him that had success with a similar skill set. Why are we still doubting these guys? Lamar Jackson finally put all that talk to rest with his dominant performance on Monday night. Another 5 touchdown passes to go along with his rushing totals doesn’t begin to describe his impressive season. He goes through his progressions like a 10-year veteran and he doesn’t try to force throws into tight windows. It’ll be interesting to watch how he finishes this season, but he is the MVP until someone else takes it from him.