While you might not have been expecting a defensive game between the Los Angeles Rams and the New Orleans Saints. Having a controversial call/non-call was to be expected. Sure enough it happened on the Saints final drive in the fourth quarter where Rams CB Nickell Robey-Coleman clearly tackled Saints WR Tommylee Lewis. There were two other instances that the referees didn’t call interference. One also involved Robey-Coleman and another the Saints should have been called for on the Rams. This just proved my assumption that the referees swallow their whistles after the New Year. What should be called and is during the regular season doesn’t get the same treatment in the playoffs. Aside from the non-call, the Saints play from the first quarter was never duplicated the rest of the game. They were outscored 26-10 the rest of the way by the Rams and their catalyst, Alvin Kamara only caught one pass in the second half and overtime. He had ten in the first half. The most impressive thing about the Rams victory is that they did so without rushing the ball effectively. They only amassed 77 yards on the ground. Jared Goff was impressive and was at his best in the 4th quarter and overtime. If that penalty was called, the Saints in my opinion had it cinched with a 99% chance of victory. Of course there was a chance for the Rams in that scenario. Unfortunately another can of worms was opened up after this one. 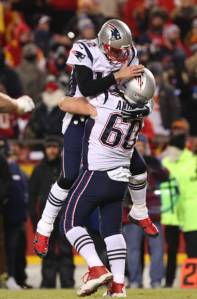 For The Ninth Time

If you thought the New England Patriots would care about anyone’s opinion outside of their locker room, you are sorely mistaken. Seeing how they played in the AFC Championship game against the Kansas City Chiefs proved to me that Tom Brady, no matter the circumstances, will be remembered as the greatest quarterback in NFL history. This will be his 9th Super Bowl for his career. How many great quarterbacks can even come close to that number? And for that what is the closest number? Four? Five? The first half was a dominant effort by the Patriots on offense and defense. Brady didn’t have to do it by himself. Sony Michel ran for 113 yards and two touchdowns. Rex Burkhead added another 41 yards and two more touchdowns, including the game winner in overtime. They outgained the vaunted Chiefs offense 524 – 290. They had the ball for almost 24 minutes more than the Chiefs. It was a masterful gameplan that Kansas City had no answer for. Even though it had to be decided in overtime. That credit goes to Chiefs QB Patrick Mahomes who has to be the league MVP for what he did in the regular season, but also for keeping that team in the AFC title game with such a disparity in the stats I outlined. He was pressured at crucial moments in the game and Kansas City could never get anything going on the ground to keep Brady off the field. I didn’t expect this outcome in the AFC, but at this point it doesn’t come as a surprise.