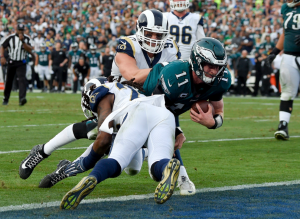 The worst fears happened for the Philadelphia Eagles after their impressive win over the Los Angeles Rams. They have lost their quarterback Carson Wentz to a torn ACL. He is handling with grace and his faith is what will get him through the long road to recovery. For the Eagles they will now turn to Nick Foles who had fairly recently led the Eagles to a division title in 2013 under then head coach Chip Kelly. Current Eagles head coach Doug Pederson is familiar with Foles during his days as an assistant in Philadelphia and Kansas City under Andy Reid. This shouldn’t be a gloom and doom scenario, but not having Wentz does change things quite a bit. 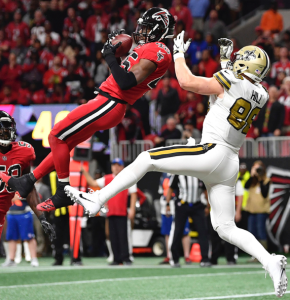 The Argument Against Thursday Night Games

It was exactly what it was supposed to be. A hard fought divisional matchup between the New Orleans Saints and the Atlanta Falcons. It turns out that injuries mounted up once again and it bodes this question to the NFL; If you’re all about player safety, why the hell are there so many Thursday night games? Having these guys play on short rest four days later is madness. Apparently because fans continue to watch football, no matter the day of the week, all that player safety talk goes out the window. Most of the time I avoid watching these games because the matchups are just awful, but when I do, it becomes more apparent that it needs to be curtailed to a minimal schedule at best.

One Reason Why I Love Football

A pretty shocking admission, but I finally experienced being in snow for the first time in my life last winter. I freaking love it. Watching football players playing in it is even better. I don’t want to see guys get hurt obviously, but seeing them play in the elements is a big reason why I love watching football. Aside from a thunderstorm, they will play on no matter the conditions. Why the Indianapolis Colts thought it would be a good idea to wear white in Buffalo is beyond me, but they almost won in overtime. This would have easily been the game of the week if not for other playoff impacting games. Who doesn’t love football in the snow?