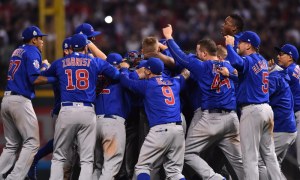 It has finally happened. The ‘lovable losers’ and the curse of the Billy Goat are no more. After 108 years, the Chicago Cubs have won the World Series. Why it took this long has many answers to it, but one thing is for sure, these guys are here to stay.

Anthony Rizzo and Kris Bryant are at the center of the youth movement for the Cubs. Addison Russell contributed the most RBIs of any player (9), including 6 in Game 6 of the series.

The World Series MVP, Ben Zobrist, who has now been apart of back-to-back World Series titles (last season with Kansas City) had the most hits of any batter (10). He also drove in the go ahead run in the 10th inning of Game 7 in Cleveland.

The only time that Chicago was on pins and needles was when manager Joe Maddon, in most peoples’ eyes, was over using closer Aroldis Chapman. The way he used him in Game 5 having him go 2 2/3 innings to get the save was what every manager would have done being down 3-1 in the series.

However, pitching him for 1 1/3 innings in Game 6 was unnecessary. They eventually added two more runs to pad the lead, but you figured that he was going to pitch in Game 7 if things got dicey at the end.

With all that about the handling of the closer, the Cubs pitching was solid. Kyle Hendricks certainly was as good as advertised with his National League leading ERA and doing better with a 1.00 earned run average in his two starts. Jake Arrieta got two huge wins for the Cubs when they needed it in Games 2 and 6. Chapman was obviously stellar until his appearance in Game 7.

Going forward this team will stay relatively intact, unless there are trades and other transactions that aren’t forthcoming at this time. The one thing this team will need to do is re-sign Aroldis Chapman. They desperately need to keep him if they want any chance at repeating.

Joe Maddon was the right guy for the job. Just like he was for the Tampa Bay Rays. He has changed the culture of both franchises and I couldn’t be happier for him with his long tenure previously as the Los Angeles Angels bench coach.

Congratulations to the Chicago Cubs and their fans. Many of them I know and am friends with. It has been a long running joke, but welcome to the winners circle.