This Is What’s Wrong

It isn’t the fact that the game ended in a tie or the fact that two kickers missed game winning field goals in overtime. This game is the perfect example for what’s wrong with football. The product was terrible. Two teams that are considered contenders in the NFC couldn’t score one touchdown and needed an extra quarter to only tie in the end. This isn’t going to be a quick fix by any stretch. The NFL is going to reap what they sowed and it started with the insane rule changes they’ve made over the years. Once again, good luck fixing this problem. 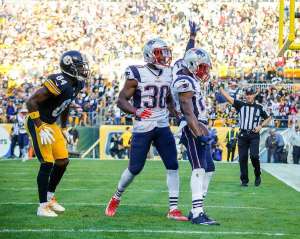 I’d like to think that if Ben Roethlisberger was playing for the Steelers that they would have made it a closer contest with New England. Either way the Patriots look really good, especially on defense. It doesn’t seem fair that they can plug almost anyone in on that side of the ball and it just works every time. Malcolm Butler is going to get paid very soon and the Patriots would be wise to keep him. They wisely let Darrelle Revis go after winning their most recent Super Bowl. You better not let this guy go in his prime. Expect another Super Bowl run for this team.

It kind of surprises me to hear that Houston Texans head coach Bill O’Brien really didn’t have any say on the team signing QB Brock Osweiler. He actually did have a say, but he was overruled. He didn’t want him. Which also surprises me considering how long the franchise has gone without a decent quarterback. Brock was given a hefty contract for only half a season of work. You can’t blame them for that since they needed a quarterback if they wanted to be considered contenders. Since the start of the season he and O’Brien have not been on the same page very often. Houston has struggled on offense and the defense is starting to suffer. Either way you look at it, this could be the end of O’Brien’s tenure soon if he truly was overruled on the Osweiler decision.