What Happened In Big D?

If you know the answer to that question please let me know. The Cowboys had no business winning that game. Reason why I say that is because the New York Giants were winning 26-20 with just over a minute and a half to go in the game. All the Giants needed to do was to let some more time go off the clock on third down. They were on the Cowboys two yard line mind you. Dallas had no timeouts and the game looked to be put away. However, for some reason Giants QB Eli Manning began to rollout to the right and proceeded to throw the ball away to the back of the endzone. After the game Giants running back Rashad Jennings said he was told by Eli not to score. That’s fine, but Eli you really should have just taken a knee instead of throwing the ball away. The Cowboys had the ball back with a lot of time left and proceeded to drive down the field for the winning score. This game will be talked about for quite some time. Both in New York and in Dallas. One got a huge break and the other blew an opportunity.

I got sucked into the hype in Buffalo a few seasons ago. I’m not going to now. You beat what looked like an over-hyped Indianapolis Colts team that wasn’t prepared for a Rex Ryan led Bills team. Now Ryan doesn’t deserve all the credit, but he got his players better prepared than Chuck Pagano did with the Colts. Do I believe Tyrod Taylor will get the Bills to the playoffs? No. Do I think the Bills defense can do that? Yes. This is a perfect mold of what Rex Ryan had with the New York Jets. A questionable quarterback situation, but solid at every other position. Come back to me next week when the Bills play host to the New England Patriots. You beat the defending champions decisively, then I will start to listen. For now I stay skeptical. 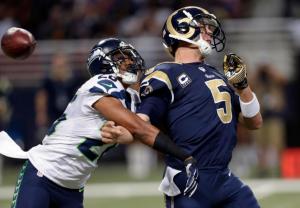 St. Louis Rams quarterback Nick Foles, right, fumbles as he is hit by Seattle Seahawks defensive back Cary Williams while throwing during the fourth quarter of an NFL football game Sunday, Sept. 13, 2015, in St. Louis. Williams recovered the fumble and returned the ball for a touchdown. (AP Photo/Tom Gannam)

Could Be Trouble In Seattle

The key word is ‘could’. With defensive back Kam Chancellor holding out and a lot of questions surrounding head coach Pete Carroll and his coaching staff when it comes to play calling, things could get dicey for them. Take for instance the opening game of the season. They’re playing a St. Louis Rams team that has a new quarterback and their top two running backs are out for this game. They don’t have a lot of legitimate receiving threats and their offensive line has some holes the Seahawks defense can exploit and they did. Still the Rams were able to take the game into overtime and come away with a victory. Seattle had some offensive line issues too as they allowed quarterback Russell Wilson to be sacked five times. I can’t remember him ever being sacked that many times in a game. Also they seldom used their new receiving threat in tight end Jimmy Graham. He did catch a touchdown pass, but he wasn’t even targeted in the overtime possession. Pete Carroll’s decision to try a surprise onside kick to start overtime is another in a line of questionable play calls with none bigger than last years Super Bowl; passing instead of running the ball on the one yard line with Marshawn Lynch. Big test for them next Sunday in primetime against the Green Bay Packers at Lambeau Field. A lot is riding on that game.