When you really think about it the Cleveland Browns could be undefeated. Their two losses were by 3 points or less and they were in control for most of those games. There is the off chance this could blow up in their face though. If for example current starting QB Brian Hoyer begins to struggle, the Browns fan base could start screaming for Johnny Manziel to play. That would potentially make things worse. Another problem, like with the Pittsburgh Steelers is their schedule is incredibly easy. At Jacksonville and at home against Oakland and Tampa Bay. That’s the next three games for them. If they lose any of those games it could start a downward trend. Luckily for them they are relatively healthy and they don’t seem to mind the pressure that comes with being a winner in Cleveland. 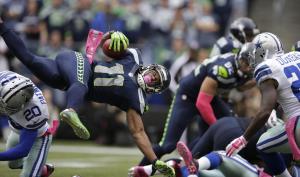 Dallas Made A Statement

For one thing the Dallas Cowboys apparently have a lively defense. The second thing is with that win against Seattle it resulted in the Seahawks trading away WR Percy Harvin. I can’t remember the last time the Cowboys actually forced a team to make a drastic move after a loss. All this success for the Cowboys goes back to one thing. Running the football. I have been saying it for a few years now. Give the ball to DeMarco Murray as much as you can. He is a special back. Albeit he does have a fumble problem that needs to be fixed, but he is a workhorse that isn’t going to slow down anytime soon. For once the Cowboys have a good thing going. Of course it does start with the unheralded players via the offensive line. A lot of high draft picks over the last few years are coming together quickly to give Dallas a good starting point. Lets see if this lasts.

We’ve already had one coaching change in Oakland. We could possibly see another one in New York with the Jets. Acquiring Percy Harvin isn’t the answer, but the Jets need something to get them going. Rex Ryan was really doomed from the start of last year. The fans weren’t going to take anymore of Mark Sanchez at quarterback and so Geno Smith was thrown into the fray at an early stage. Geno has no real shot of getting into a groove with the pressure and the Jets don’t have the right personnel around him to make it work. The offensive line is inconsistent and the running game can’t get going. There are some receivers around this year, but even with Harvin that is asking a lot when the quarterback can’t deliver. I don’t think the Jets will fire Rex in the middle of the season, but things won’t get much better going forward.