Yes, They Are Serious

The plan has been put into motion for the Las Vegas Raiders and so far they have looked good. Are they primed to get past the Kansas City Chiefs as of this moment? No, not yet. They did defeat the Chiefs at Arrowhead and right now have put themselves in a good position going forward in the AFC West. What was the masterful plan that led to their victory? It was to simply keep the ball away from Chiefs QB Patrick Mahomes as long as possible. The Raiders had the ball for over 11 minutes longer than the Chiefs. They didn’t abandon the running game with Josh Jacobs scoring two touchdowns. Their defense played surprisingly well, especially in the second half. This was a big statement game for Las Vegas and they put Kansas City on notice. 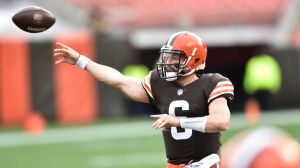 Are They Pulling Our Chain?

We’ve seen this kind of performance from the Cleveland Browns before. Granted they haven’t been 4-1 since Bill Belichick was their head coach. What I mean is that they have shown flashes of a franchise turn around before, specifically with Jimmy Haslam as the owner, only to fall flat and embarrass themselves in the process. They are not out of the woods just yet. They’ll have to play Pittsburgh and Las Vegas in two of their next three games before the bye week. If they win one of those games, let’s say the Steelers game. I’ll start to take notice. After their Week 1 butt whopping at the hands of Baltimore, the Browns has scored no less than 32 points in four straight games. Their defense has played well at times, but the offense is starting to live up to that potential. I’m with holding judgment right now, but I’m starting to lean towards them being contenders.

In his first season as the head coach of the Atlanta Falcons, Dan Quinn had a 6-1 record to start the 2015 season. They went on to lose 7 of their next 9 games to finish with an 8-8 record. The next year was a historic offensive season and a 28-3 lead in the Super Bowl. We all know what happened after that. They did make the playoffs the following season, but were outplayed in the Divisional Round against Philadelphia. Horrible starts plagued the Falcons in 2018 and ’19 to finish with 7-9 records each time. This season was no different as the Falcons are currently 0-5 and going no where fast. Could have been the result of that disastrous Super Bowl loss? There is some credence to that, but the countless times this team found ways to lose, including this season was just sad. They need to clean house. If that means moving on from Matt Ryan, so be it. They need a fresh start and owner Arthur Blank needs to find someone who can wash away the losing atmosphere that has infected this franchise. They’ve always had some intriguing teams in their history, but could never get to that next level. They need someone who has the proven track record to get them over that hill and out of the cellar they’re currently in.