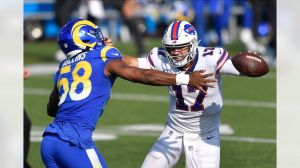 Here’s Proof For You

Sure, Buffalo was helped by the fact they played the two worst teams in their division to start the year in the New York Jets and the Miami Dolphins. Their first test was against the Los Angeles Rams and they passed it, to a degree. They had a 21-3 halftime lead and increased it to 28-3 at the start of the second half. Then the wheels fell off. To be fair no one on their offensive line and frankly no one in the league can contain Rams DT Aaron Donald on their own. He showed why he is the best in the league and was constantly in Bills QB Josh Allen’s face. Yet, when it mattered most the Bills had the ball for the final drive and Allen showed why he should be considered an up and coming quarterback leading his team to a 4th quarter comeback win being down 32-28. It should have never gotten to that point and the Rams shouldn’t have allowed the Bills to be in that position on 4th down with the controversial pass interference call. He’s thrown 4 touchdown passes in consecutive games and has another good test next week playing against the Raiders.

Russell Wilson has thrown 14 touchdown passes through the first 3 games of the season. Two things are happening right now in Seattle. One, they aren’t a run-oriented offense anymore. They are letting Wilson show why is among the best quarterbacks in the league. Considering he does take a beating with a porous offensive line for most of his career, that speaks to his talent level. The other is that their defense hasn’t been doing them any favors. In their last two games they’ve allowed a combined 61 points and you could excuse that to the fact that there hasn’t been any fans for those two home games, but this is a bad trend. Wilson has a deep group of receivers and tight ends to throw to and that explains the passing numbers. Mostly this has to do with a philosophy change on the Seattle coaching staff. He has thrown for 30 touchdowns or more four times in his career including the last three seasons. This year should be different being on pace for well over 50. I don’t know if that will happen, but getting 45 at a minimum will put him as the clear MVP favorite.

Currently there are six teams (3 in each conference) that are 0-3. I would count the Cincinnati Bengals and the Philadelphia Eagles as 0-3, but they had a tie game so I can’t. The three that I will highlight though are teams that shouldn’t be in this position. The Houston Texans, Minnesota Vikings and the Atlanta Falcons. We all know what has been happening with the Falcons. They should have at least two wins, but they appear to have given up after those disastrous losses. The Texans were given no breaks to start the season and had to play the Chiefs in Kansas City. Then the Baltimore Ravens at home. And this last week the Pittsburgh Steelers on the road. Lastly the Vikings who lost a high scoring affair against the Packers. Then couldn’t score any points against the Indianapolis Colts. And couldn’t hold the Titans at bay with a 24-12 lead in the 3rd quarter. One of these teams will end this 0-3 record with Houston and Minnesota playing each other. Atlanta has to play Green Bay on Monday night. I expected all three to be playoff contenders, but at this point it’s becoming obvious they are not.