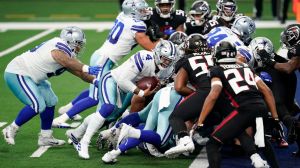 When a team has a 20-point lead at the end of the first quarter, a 29-10 lead at halftime and with a little over 8 minutes left in the game, has a 15-point lead you’d think that team would end up winning the game. That wasn’t the case with the Atlanta Falcons. As I mentioned on Twitter (see below) this loss wasn’t on the level of 28-3 in Super Bowl 51, but it deserves to be mentioned in the same breath.

The Dallas Cowboys not once, but twice attempted a fake punt in their own territory. The logic with that is if you end up going for it on 4th down, just keep the offense on the field. Ask Bill O’Brien of the Houston Texans who does that with the best of them. Anyway, Dallas had no business winning this game. They had about 20,000 fans in the stadium and they were all regretting attending this game. By the end they were a joyous bunch of Cowboys fans making you think it was a crowd of 70,000 or more. I remember people were blaming the play calling of the offensive coordinator at the time Kyle Shanahan for the Super Bowl debacle. This loss is squarely on head coach Dan Quinn. And frankly that Super Bowl loss is solely on him now. I’m not an Atlanta Falcons fan, but even I’m pissed about how this game against the Cowboys ended. 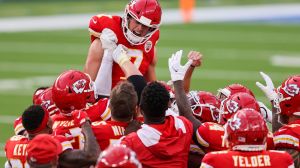 One thing I learned is that Chargers rookie QB Justin Herbert impressed the hell out of me after his first NFL start. What little football they actually showed on Hard Knocks this past summer, I wasn’t sold on Herbert and figured barring injury he wouldn’t be playing much this year. Well, low and behold Tyrod Taylor wasn’t able to go and Herbert got the call at the last minute. Turns out Taylor had his lung punctured by the team doctor who was giving him a routine injection to treat his injured rib. Herbert was down right masterful at times (311 passing yards – 1 TD pass – 1 TD run) and his only mistake was throwing an interception late in the game into double coverage. That gave the Chiefs and QB Patrick Mahomes enough life to eventually tie the game and win it in overtime. The other thing I learned is that Harrison Butker is the best kicker in the league. He booted two 58-yard field goals and one of them being the game winner. Oh and a bonus one if you didn’t already know from the playoffs last year is you don’t count out QB Patrick Mahomes. 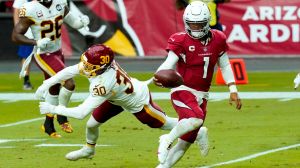 Patrick Mahomes, Lamar Jackson, Kyler Murray as the next MVP? I know, it is premature to say that, but Murray has been downright scary in the first two games. He dissected a stellar defense in the 49ers during Week 1 and while I’m not putting the Redskins defense in that category, I was praising them after their first contest. Murray has thrown for 516 yards and 2 touchdown passes through the first two games, but he has already racked up 158 yards on the ground with 3 rushing touchdowns. What makes him scarier than most is the way he navigates by defenders and isn’t even touched most of the time. Arizona plays in the toughest division in the NFL, but it wouldn’t surprise me in the least to see them clinch that extra playoff spot. I base that on getting WR DeAndre Hopkins, but if Murray keeps this up on the ground game as well the Cardinals will be sitting pretty for many years.