The Most Insane Game Ever

Normally when I write my weekly reviews in the NFL, I focus on three games or moments of that particular week. This week was special in that one of the most insane games ever played was on display for Monday night. I will focus solely on that game and try to summarize the events that took place. Fasten your seat belt. 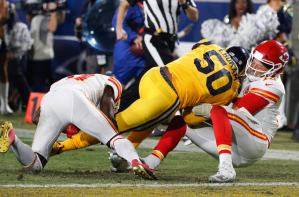 It Was Tied At 23 At Halftime

Where to begin? The Rams started out strong. A bit of pre-game inspiration as this game was originally going to be held in Mexico City, Mexico (yes, another country). There was a shooting at a bar in Thousand Oaks, California, (which is currently the hub for the Los Angeles Rams franchise) on November 7. And with the deadly wildfires taking place in the state, lots of support and solidarity filled the Coliseum. QB Jared Goff threw two touchdown passes and had the Rams ahead 13-0. Not to be outdone, Chiefs QB Patrick Mahomes answered with a quick strike to Tyreek Hill. This was the first quarter mind you. With a few field goal exchanges by both, it ramped up with Mahomes throwing another touchdown to Kareem Hunt. Then he fumbled only to have it returned for a touchdown by the Rams. To close out the half though, Mahomes connected with Chris Conley for the tying touchdown to end the half. Like I alluded to earlier, this was just the first half.

This Game Had Defense Too

Besides the first defensive touchdown in the second quarter (there were 3 total for the game), you might have had the impression that either teams defenses’ wouldn’t show up for this one. On the contrary they did, but the offenses’ were just so damn good. Samson Ebukam recovered Mahomes’ fumble in the second quarter for a touchdown and also intercepted him for the second defensive touchdown late in the third quarter to put the Rams up 40-30. When Mahomes threw a 73-yard bomb to Tyreek Hill early in the 4th quarter, the Chiefs defense answered the call and caused a fumble to Jared Goff and returned it easily for a touchdown to put the Chiefs up 44-40. The Rams got the last laugh as Goff threw his last two touchdown passes to TE Gerald Everett, including a 40-yard toe tapper down the sidelines for the game winning score. 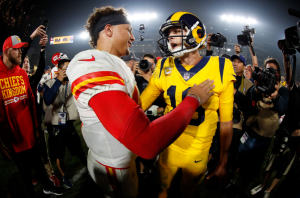 I’m not a betting man, but when I saw that the total point line for this game was 63.5 I literally laughed out loud and thought, “over all the way.” A combined 105 points was scored. A total of 1,001 yards by both teams. Three defensive touchdowns and no there wasn’t a partridge in a pear tree. I encourage to watch the highlights from this game. If you didn’t watch it live, I’m sorry, but thanks to modern technology this game will be replayed for years to come. Lost in all this insanity is the fact that Patrick Mahomes finished with 6 touchdown passes and Jared Goff had four, including a rushing touchdown to boot. Not only was it a high scoring affair, but it was a quarterback duel the likes of which we might not see until a week or two from now. This is what the NFL wants and they will get it.