Remember all that talk about Cam Newton being in the conversation of the elite quarterbacks in the NFL? That was only two seasons ago when Carolina went 15-1 and made it to the Super Bowl. Flash forward to present day and he is back in that conversation after leading the Panthers to an impressive road victory against the defending champion New England Patriots. Newton had three touchdown passes and ran for another while accumulating 350 yards through the air and ground. This was the kind of performance that puts him and the Panthers back in the conversation of being contenders in the NFC. 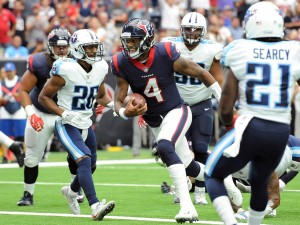 Proving Them All Wrong

Hopefully you didn’t forget how good Deshaun Watson was when he was playing for the university of Clemson. Leading them to the national title game the last two years and winning last year in thrilling fashion against Alabama the second time around. Seeing how impressive he’s been the last two weeks for the Houston Texans has me wondering why he was selected only 12th overall in the draft? He certainly has the mobility that is somewhat required of today’s quarterbacks, but his pocket presence he showed against Alabama was impressive. It has continued with the Texans and they are reaping the benefits with a blowout victory against Tennessee. Throwing for four touchdowns and adding a rushing score has the entire league watching to see if he can keep this up.

Remember when Todd Gurley was the talk of the league as a rookie two years ago? I sure do and it was no surprise seeing that he had the unique skill set to dominate in the NFL. His size and speed are nearly unmatched. Not to mention that he can also be a scary good receiver out of the backfield. This was something missing from the Rams offense last year. Obviously the offensive system in place this year is a big reason for the Rams 3-1 start. But in order for it to work and put up 46, 41 and 35 points in those three victories, you need players like Gurley to accomplish that. It was stunning to see him struggle last year, but a welcome sight to have him back to his usual self.