I hate to say I told you so, but the AFC West had some drama right down to the wire. All the Oakland Raiders had to do was defeat the Denver Broncos and they would be the #2 seed in the AFC. It was no easy task having to do it in Denver and without QB Derek Carr. It became even more difficult when backup QB Matt McGloin went down with a shoulder injury. The game eventually got out of reach and the Raiders suffered a loss on an otherwise successful 12-4 season. If it had not been for the Kansas City Chiefs defeating the San Diego Chargers, the Raiders wouldn’t be too down trodden today. With the Chiefs victory, they are now the #2 seed and get an extra week of rest. Oakland now has to travel on the road for most of the playoff run and with two injured quarterbacks. It’s amazing how fortunes can turn around for two teams playing in the same division. 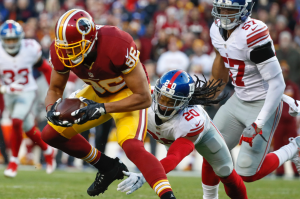 The one team in control of their destiny was the Washington Redskins. They had to win their final game in order to secure a playoff spot. Alas their division rivals, the New York Giants, had other plans. New York had nothing to play for and yet most of their starters played in the game. It goes to show you that the NFL got this right a few years ago when they decided that the final week of the regular season would have division teams playing each other. This means the chances of teams mailing it in for the final game won’t happen as much as in years past. Regardless, the Redskins knew what had to be done and yet played their worst game of the season. They had opportunities to pull ahead, but couldn’t get over the hump. The elephant in the room once again is will they pay QB Kirk Cousins or give him the franchise tag. What they decide could be solely based on that final game.

Usually head coaches get fired the day after the final game. This year it seemed as though they were being let go as soon as the final seconds ticked away. San Diego and San Francisco fired their head coaches. The 49ers went a step further and fired their general manager. Buffalo, Jacksonville and Los Angeles all fired their head coaches before the final week of the season. One other vacancy came as a bit of a surprise and that was the retirement of Denver Broncos head coach Gary Kubiak. He has been one of the most well-respected coaches in the NFL for some time. Being an offensive coordinator on many Super Bowl teams and winning a Super Bowl last year as Denver’s head coach. He has suffered some medical scares, most recently this year suffering a ‘complex migraine’ and having to be hospitalized. A lot of times coaches, like players will walk away after winning a championship. Gary felt “the demands of the job were no longer a fit” for him and has moved on. I wish Gary nothing but the best going forward. He was a class act.