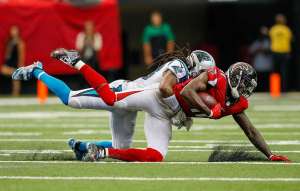 Anything You Can Do, Julio Can Do Better

I’ve said that Antonio Brown of the Pittsburgh Steelers is the best wide receiver in the NFL. When Calvin Johnson was playing for the Detroit Lions, he certainly could make an argument for himself to be the best in the league. Now that Megatron has retired, Julio Jones seems to have replaced him in that category and he won’t be relinquishing it anytime soon. His recent performance of 300 yards receiving against the defending NFC champion Carolina Panthers has him on a different level. How the Panthers forgot about him during that game is beyond me. Next time they need to be looking for number 11.

Their defense and specifically their front seven is the Rams only saving grace. Until you start seeing Jared Goff play quarterback, that position is in flux. The receivers aren’t great, but decent. The offensive line is average at best, which doesn’t bode well for RB Todd Gurley getting 1,000 yards rushing this year. However, ever since they were shutout 28-0 Week 1, they have gone on to win three straight. Two of those wins were against division opponents. Do I think this trend will continue, probably not, but stranger things have happened. Keep an eye out for the LA Rams.

Good Thing Brady Is Coming Back

I said that I wouldn’t be surprised if the Patriots had a 3-1 or 4-0 record without Tom Brady. It’s coming at a perfect time since the Patriots were exposed against the Buffalo Bills this past week. New England didn’t have a fully healthy quarterback and didn’t really plan on throwing the ball very much. They ran the ball heavily against the Bills, but the problem is that the team is not built to run the ball so much. In fact that hasn’t been their philosophy for some time. With the return of Tom Brady, look for them to finally get Rob Gronkowski involved in the offense and Julian Edelman can be penciled in for 100 catches by seasons end.