A Statement Made In Cincy

There’s no love lost between the Pittsburgh Steelers and the Cincinnati Bengals. There’s a lot of history between these two, but especially in the last decade. The Bengals could have clinched their playoff spot with a win against the Steelers, but they weren’t going to let that happen. Besides having lost Andy Dalton and Tyler Eifert for the game, the Bengals lost their identity in the process. Pittsburgh didn’t have the greatest performance on offense, but their defense was setting up their eventual victory. This doesn’t mean the Bengals won’t be clinching that playoff spot, but it does mean that the Steelers are still in Cincinnati’s psyche. This could play out in a playoff game come January, but for now we have history to see that these two just plain don’t like each other.

Now with the initial sight of seeing Andy Dalton in cast for his throwing hand, all hell was breaking loose. What was to become of the Bengals season and playoff chances? Everyone just needed to relax and the results, while not great, were better than expected. He won’t need surgery for his thumb, but it was a bone headed play by Dalton. To throw the ball right into the defenders chest and then tripping him up with your throwing hand no less. The Bengals should be okay with A.J. McCarron taking over. He is the same quarterback who led Alabama to two national titles a few years back and has A.J. Green to throw the ball to. Not bad for someone who is a backup in this league. When the Bengals clinch their playoff spot they just need to hope they can host a playoff game because this team doesn’t seem built to play all of their games on the road. 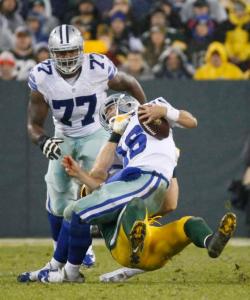 The Cowboys Season In A Nutshell

It could be summed up that the injury bug bit the Cowboys hard this year, but that is just one part of it. They bet the house that they weren’t going to need to run the ball as much this year with that offensive line being one of the best in the league. They were kind of wrong in that regard. DeMarco Murray is a good running back and just look at how lost he is in a different scheme in Philadelphia. Dallas also struggled to protect the quarterback this year with Tony Romo going down not once, but twice to a broken collarbone this year. Dez Bryant was bitten by the injury bug and not having Romo has hurt his production. The only bright spot was the defense, but that pales in comparison to the money being spent on the offensive side. This will be an interesting offseason for personnel decisions and whether or not they try to turn back towards what was giving them success, and that’s a balanced offensive attack and not just relying on Tony Romo bailing you out.