He was targeted 23 times, caught 17 passes for 284 yards and yet he didn’t even score one touchdown. How is that even possible? Better question is how did he even get open to potentially catch 23 passes? For many years I had guys like Larry Fitzgerald, Andre Johnson and Calvin Johnson as the best receiver. It’s now Antonio Brown. It isn’t just because of his performance this past weekend. This has been the norm for him in the last 4-5 years. His elusiveness is what set him apart. The three guys I mentioned earlier are great, but they are best at going up at the highest point to catch a football. In their prime they are deceptively fast and can get extra yards. What Brown does is his speed enables him to get off defenders much faster leaving them in the dust sometimes for a wide open catch. You wonder why he was open so much? It’s his agility and acceleration off the snap. Pittsburgh hasn’t seen this kind of play since Santonio Holmes or Lynn Swann if you want to go further back. Enjoy him now while you can. These guys don’t come around often. 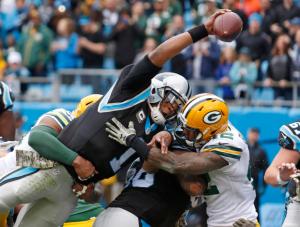 Carolina Panthers’ Cam Newton (1) reaches the ball over the goal line for a touchdown against the Green Bay Packers in the first half of an NFL football game in Charlotte, N.C., Sunday, Nov. 8, 2015. (AP Photo/Bob Leverone)

The Life Of Cam

He doesn’t wow you, but he gets the job done and thats just fine. Carolina is built off their defense first, but having a reliable quarterback that fits well in the offensive scheme of ball control and running the ball endlessly is a dying breed. The league is constantly a back and forth, fast paced environment. When teams play Carolina they are being lulled to sleep at times. The Green Bay Packers had that happen to them, but they nearly came back to push it into overtime. It’s a good learning experience for the Panthers. They can’t fall asleep themselves and let that happen. Even against so-so teams that they should beat. Eventually they will lose some games, but being 8-0 right now is a good thing. Cam Newton is being discussed as the possible MVP right now, but time will tell if he can keep up his play and have his team possibly get home field for the playoffs.

The End Of An Era

This wasn’t entirely Colin Kaepernick’s fault. The teams deserves some blame as does the media to a certain extent. There was constant coverage of Colin as the next big thing that when things begin to go wrong, the world comes crashing down and that can be tough for anyone to handle. Towards the end of Jim Harbaugh’s tenure I could tell that Colin was being held back on having more freedom in the offense. They were trying to make him into something that he’s not and that’s a pocket passer. What got the 49ers to the Super Bowl? It was Kaepernick being a mobile quarterback. That’s who he is. That’s where it’s partially his fault. He was trying to be something he isn’t. That’s not to say that he can’t regain footing in the organization or find a new place to call home. It was a series of many events that lead to his benching. Poor play by him and the offensive line that wasn’t doing him any favors when he was standing in the pocket. The organization not knowing that you can’t change somebody into something he’s not and the pressure of the win now climate. He was put into a no-win situation. I want to see him succeed. Not just because it’s my team, but I generally think that he can. He knows who he is and he needs to show that this is why he brought so much success to the team.