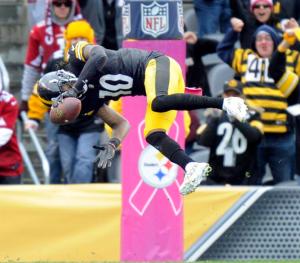 Pittsburgh Steelers wide receiver Martavis Bryant (10) flips into the end zone to score a touchdown after making a catch in the fourth quarter an NFL football game against the Arizona Cardinals, Sunday, Oct. 18, 2015 in Pittsburgh. The Steelers won 25-13. (AP Photo/Don Wright)

Quite The Surprising Outcome

We’ve probably seen the last of Michael Vick. Of course he will have to atone for the dog fighting conviction for the rest of his life, but in football terms this looks to be it. Pittsburgh was stagnant for a large part of the game and then Vick had to leave with a hamstring injury. Enter Landry Jones, the former Oklahoma quarterback, who promptly did the job of offensive savior getting the Steelers the lead against the Arizona Cardinals. Coming into this week, the Cardinals had the highest scoring offense in the league and on paper it spelled doom for Pittsburgh. However, their defense held tough and force three turnovers and kept Arizona’s offense in check. Ben Roethlisberger will be returning soon, but knowing that they have a reliable option in Landry Jones with Vick’s injury problems has the Steelers very optimistic.

Atlanta Falls Back To Earth

Yeah, it was only a matter of time. The New Orleans Saints weren’t fooled. It was a home game on Thursday night and they weren’t going to let Atlanta walk into the building like they owned it. The Falcons offense still put up some impressive numbers, but the turnover bug returned to Matt Ryan. Atlanta’s defense isn’t that good to begin with, but they were exposed by the Saints and Drew Brees. This is a good thing for Atlanta. Sure Carolina, another division rival is still undefeated, but you would rather lose the first game now. With that the pressure dwindles and no one really pays attention to you anymore. The Falcons next three games are against Tennessee, Tampa Bay and San Francisco. A fairly easy schedule leading up to their bye week. They win those three and they’re in the driver’s seat to the playoffs.

The Definition Of A Passing League

San Diego Chargers quarterback Philip Rivers attempted 65 passes this past Sunday. I don’t think I’ve ever seen a quarterback throw the ball that many times in a game. He completed 43 of those passes which is insane as well. Of course he also had 503 yards to go along with two touchdowns. An amazing game, but the Chargers couldn’t beat the Green Bay Packers with Rivers putting up those kind of numbers. What does this tell you? There is no doubt anymore that the NFL has become a passing league and will never go away from that. And the second is that with those kind of numbers from a quarterback, it won’t always get you a win. You will still need to run the ball on occasion to keep the ball away from the other teams quarterback. Lesson learned San Diego.