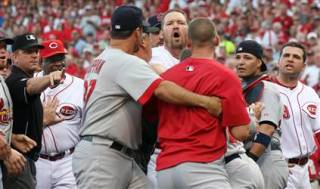 There will always be rivalries between sports fans.  Boston vs. New York.  Los Angeles vs. San Francisco.  Chicago vs. St. Louis.  Those are just a few of the best in baseball.  Over the years though, it has become apparent that with free agency being the norm that the players no longer see it that way.  Guys have played with one another at one stop or another and they don’t have any animosity towards them.

Thankfully, Cincinnati Reds All-Star second baseman Brandon Phillips doesn’t see it that way.  His comments Monday before their three game series against the St. Louis Cardinals has opened up a brand new can of worms during the pennant race in the National League Central Division.

Anyway you just knew something was going to happen in this series.  And of course something did.  I figured it was going to be a beaning to Phillips that would get this going or some chin music.  Something to that nature.  It went completely the other way without a pitch even being thrown.

Phillips gets to the batters box and proceeds to tap the shin guard of Cardinals catcher Yadier Molina.  Molina kicks at his bat to which Phillips pauses for a moment, then lightly taps his shin guard again.  Phillips steps out of the box, takes a practice swing and gets into his stance.  I should point out that this is in the bottom of the first inning.

Molina doesn’t let Phillips get in his stance and begins that trash talk.  As with every baseball brew-ha-ha no one really wants to fight.  Reds third baseman Scott Rolen was playing peacemaker calming down Molina while the managers Dusty Baker of Cincinnati and Tony LaRussa of St. Louis were talking with the umpires.

It was still pretty uneasy when Baker proceeded to walk back towards the dugout and Cardinals pitcher Chris Carpenter said something that apparently wasn’t taken too kindly by the Reds players.  A lot of pushing and shoving occurred at the back stop.  The Reds starting pitcher for that game Johnny Cueto was seen kicking, spikes up, at a Cardinals player or two.

After all was said and done, the umpires tossed both Baker and LaRussa.  With that there would be no chance of someone being pegged in the back with a fastball.  Yadier Molina, who helped start it all, answered with a solo HR in his first at bat to put the Cardinals up early.  Molina proceeded to imitate Phillips’ home run trout when he rounded second base.  Way to rub it in.

The Cardinals went on to win the game 8-4 and are looking for the sweep today.  After it’s all said and done, this is what I want to see more of.  Not bench clearing brawls, but players actually hating one another.  It adds to the intensity of the pennant race in baseball.  It would also add to the intensity of the NBA playoffs, Stanley Cup playoffs and for the NFL.  I want to those glory days to come back.

Phillips was given a chance to retract his statements earlier in the week, but he stuck to his words and added a little more to it.

“The comments I made yesterday, those are my comments,” Phillips said.  “I said those things and I really mean what I said.  The Cardinals, they’re a great team.  They’re the team to beat, like I’ve said a million times.  But we have to beat them.”

These are two of the best teams in the National League this year.  They don’t like each other and that’s good.  Phillips spoke the truth that you have to beat the best to be the best.  Fans will always hate their teams rivals, but the players should show a little more hatred too.