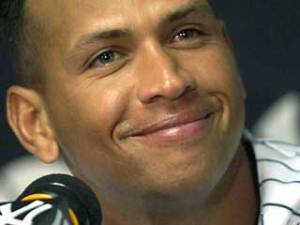 I’m the kind of person that believes if you treat others as you would like to be treated, good things will come to you. What goes around comes around you could say also. This guy is something else. Since the revelation of using steroids in February, Alex has laid low. For the most part. He had to. After that strange and disastrous press conference in Tampa where he gives a pause of what seemed to be thirty minutes to say “thank you.” I still can’t believe his teammates were there. But then again they had to. They are going to be asked all season long about him and his problems so lets just get it out of the way now. Johnny Damon saying that he could have done worse things than taking steroids is a good point. When asked what is worse, he responded, “murder.” Yeah, murder is worse Johnny, but what about in terms of baseball. I think that was the context of the question. Now with Sports Illustrated reporter Selena Roberts book, “A-Rod”, due to come out in the next week, Alex and his teammates are gonna have more questions come their way.

I don’t want to speculate about his steroid use. Whatever comes out in the future, (believe me there will be more), he took something. He says he took the drug(s) from 2001-2003. Sure you did. I’ll take your word for it after your Katie Couric interview. The book alleges that Alex was using as far back as high school. In less than a year he was benching 100 pounds and went up to 300. Again, whatever. I’m more intrigued about pitch tipping. That is unforgivable in baseball clubhouse standards. Telling an opponent what pitch is coming from your teammate and expecting the same when it’s your turn to the plate is beyond being a narcissist. That is being a rat and the ultimate “screw my team” move. You can’t be forgiven for something like that if it’s true. Would it really surprise me if it is true. No. 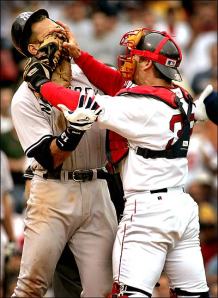 (Maybe Varitek can give you another good smack this season)

“To me it seems like a lot of ‘He said, she said’ kind of stuff,” Yankees manager Joe Girardi. That maybe true if this were a marital dispute between Selena and Alex. Alex has those already with his ex Cynthia and the skeleton Madonna. Man that’s gross. Joe has enough trouble already with his horrible Yankee team. To make that comment is a bit of a reach for him. Again it is all alleged, but we can’t dispute this kind of stuff right off the bat. “Game of Shadows” really opened our eyes to the sickness that some athletes have over themselves and their image. This book about Alex is not like that book at all, but it reveals what many already knew about the fraud that is Rodriguez. From the other side I can see that Alex could never win. With that kind of talent that he has and the pressure that comes with that, he was brought up so fast and came down so much faster. But Alex, why did you sign that contract? He rationalized with Peter Gammons back in February that with him signing that contract it brought a lot of pressure to perform and produce at a high level. Simple solution, don’t sign. Yes you would be stupid not to, but that pressure goes right out the window along with all the anger from some. You could have sticken it to Scott Boras and settled for less, like you did in 2007 after opting out of that contract and settling for less to stay with the Yankees. Use your head for once Alex. 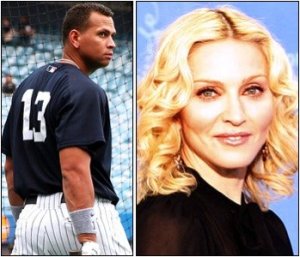 (What were you thinking going with this succubus)

To be fair, as a society we seemed to have strayed away from the concept of “innocent until proven guilty.” It’s a great concept, but with the “court of public opinion” it’s the opposite. I’m not here to judge by any means. Mainly to advise. As the adviser for Alex my first piece of advice would have been to come clean from the start. We forgive very quickly in our culture. You have to be honest about it and not come off as some melo-dramatic type who craves attention. Two, keep quiet. Once you have come clean there shouldn’t be anything more. No stupid magazine covers that slam home the narcissist point and just play baseball. And my last piece of advice is too make an effort to tell the young generations about the dangers and stupidity of what you did. I don’t see it enough from the big name athletes. They say their going to talk to the youth and tell them what they did was wrong and the dangers of it and how it affected them. WHERE ARE YOU? If it’s a case of no media attention then I will point my frustration with them, but come on. I came across a story this past week on ESPN’s show “E:60.” A great show by the way. This man is a bodybuilder who got caught up in using and selling steroids. By looking at him is reason enough to see the dangers, but he has come to that realization only now that they ruined his life. I leave you with this quote from him that A-Rod, Bonds, McGwire and even Canseco should be telling the youth about steroid use. “I think you’re an idiot if you do them, because if you get caught, you’re gonna go to jail.” Gregg Valentino.