In less than 24 hours another crop of college athletes will make the jump into the NFL. Another year of what ifs and what could have been questions and opinions. Five years later we will look back and see who our favorite team could have taken instead of that “bust.” Those unfortunate teams who have had the number one pick, have been burdened with the pressure of making that player into a success. A franchise savior so to speak. This year is no different. The win less Lions (I’m not going to gloat D-Town) are expected to pick Georgia quarterback Matthew Stafford. A name which in the past two weeks I will not forget because of all the crazy non stop coverage. Will this Bulldog fair better than other number one picks? Only time will tell.

Is it really different? They’re still the Lions.

Let us take a trip down memory lane with Detroit and the number one pick. Detroit had the number one pick in three previous years. In 1943, Detroit took Running Back Frankie Sinkwich out of, coincidentally enough, Georgia. Played with the Lions for only two seasons due to an injury in the military, but did win the 1944 NFL MVP award with Detroit. 1950, the Lions picked Leon Hart, Heisman Trophy winner, out of Notre Dame. He won All-Pro honors on offense and defense in 1951. All his eight seasons were played in Detroit. The last time the Lions had the number one pick they chose Running Back Billy Sims out of Oklahoma in 1980. Sims was on the verge of having a good career. A knee injury knocked him out in 1984 and had to hang up the cleats. Billy Sims had over 5,000 yards rushing, 2,000 yards receiving and 47 total touchdowns in just five seasons. Since Billy Sims, Detroit’s drafts have been abysmal. Examples: Andre Ware 1990, Bryant Westbrook 1997, Chris Claiborne 1999, Joey Harrington 2002, Charles Rogers 2003, and Mike Williams 2005. The lone bright spot was Barry Sanders 1989. Calvin Johnson 2007 could be another, but I will hold judgment. The pressure is on Detroit this time around more than any other. Not for economic reasons, but just the fact that they don’t compete. EVER!

Talk about the odd couple, but these two have something in common.

When you have the number one pick, it’s kind of bad. You were the worst team the previous year and you need some work to get back to the top. When you have the number one pick back to back years. You have twice as much work and really almost no hope of getting out of the cellar. It’s happened. Most recently with the Cleveland Browns and Cincinnati Bengals. Why do I mention this? To give Detroit a break. Most teams will not screw up the number one pick. Yes it’s happened quite a few times, but it won’t be as bad as they two. 1994, the Cincinnati Bengals took Defensive Tackle Dan Wilkinson out of Ohio State. What did Wilkinson do while in Cincy? Nothing to warrant being the number one pick. Only played four years in the Nati. Was let go after no Pro Bowls or playoff appearances. What makes this worse is that the following year the Bengals again with the number one pick took Running Back Ki-Jana Carter out of Penn State. It wasn’t that Carter didn’t perform up to standards, but he was bit with the injury bug. What makes it worse is that Marshall Faulk, soon to be Hall of Famer, was taken right after Wilkinson in 1994 by the Colts. Man thats gotta hurt.

Cleveland in 1999, their first year back since the now Baltimore Ravens left town, decided to take Quarterback Tim Couch out of Kentucky to lead the franchise back to greatness and maybe a Super Bowl championship. Couch was the first of five QB’s taken in that first round. Couch was given way to much on his shoulders. There was no line to protect him and pretty much no weapons either. Sheep to the wolves in this case. When the Browns started to turn things around an injury kept Couch from getting them into the postseason. The following year he lost the starting job and his career began to come to an end. The year after Couch was drafted the Browns, again with the number one pick, chose Defensive End Courtney Brown out of Penn State. Brown like Wilkinson for the Bengals, never lived up to the hype and faltered quickly in Cleveland. Seven seasons and no Pro Bowls later, Brown did land in Denver, but could not salvage his career. The person taken after Couch in the 99′ Draft was Quarterback Donovan McNabb. Taken by the Eagles McNabb, as you all know, is one of the best QB’s in the league. I’m not saying Donovan would’ve lasted longer than Couch in that mess, but you got to wonder. 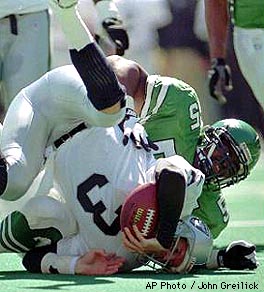 Jeff has fallen on his head so many times during his career.

I now come to my decision on the worst number pick of all time. It might come as no surprise to those that truly were wronged by him. Expectations are hard to live up to. Especially when you were brought into a losing franchise from the start. Quarterback Jeff George drafted in 1990 by the Indianapolis Colts is my worst number pick of all time. I went back and forth between him and Linebacker Aundray Bruce. Bruce did produce, but to label him the next Lawrence Taylor was not fair to him. There will never be another L.T. Oh, I forgot about LaDainian Tomlinson, anyway I didn’t go with Bruce based off that. I could have gone with Michael Vick or David Carr, but that was too easy. And since this is the worst number one pick that takes out Ryan Leaf (told myself I wasn’t going to mention him), Akili Smith, or Lawrence Phillips. Wow those three were terrible. Jeff’s career totals were not that bad, but no Pro Bowls, two playoff appearances and several bad teams. His best year oddly enough was in Oakland 1997. Jeff threw for under 4,000 yards passing with 29 touchdowns to only 9 interceptions for a 4-12 Raider team. That epitomizes Jeff George’s career. When expecting great things, fail. When expecting nothing, truimph. Beware those with the number one pick. Many will turn your franchise around, but those will also become Jeff George. Yikes.