He really does. Let me set the scene for you. For example. Team A is playing at home against Team B. Team B’s pitcher, in first inning mind you, is in a jam. A runner on second and a good hitter at the plate. The pitcher waits nearly 12 seconds before finally throwing the ball towards home plate. Team A’s batter waits as long before asking the umpire for time. Key word “asking” for time. Knowing the umpire might not grant it. Time was granted. The pitcher saw that time was called, but in a split second decided to throw the ball. It happens. The momentum of his delivery carries him forward and he releases it. Not at the guy’s head though.

(Josh will get to do a lot of sitting)

With that, Team A’s batter was Angels outfielder Bobby Abreu and Team B’s pitcher was Red Sox starter Josh Beckett (pictured above). Now I’m not one to label anyone a head hunter. That’s not the label I’m giving Beckett. He is a very emotional and competitive guy. Just look at his postseason numbers for one. But I will go as far as to call him a dirty player though. You don’t throw at a guy’s head. In any situation. Baseball has it’s unwritten rules when it comes to retaliation. Bean him in the hip, butt, foot even as high as the back. Never the shoulder, neck or noggin. There is also a double standard in Baseball when it comes to when guys get thrown out. If Abreu had taken one step towards the mound, “Your Out.” Beckett however, waltzed toward the plate appearing more upset than Abreu. For what? I get that picther’s don’t like it when batters call time when their about to throw. I get that. Time was awarded to him Josh. Get mad at the ump.

(Don’t pull a hammy there Joe)

To make matters worse was the umpire crew at the game. Lead by crew chief Joe West (pictured above) who was at second base and not at home where the incident started. The only thing I remember Joe for, outside of Baseball mind you, is his apperance at the end of the first “Naked Gun” movie. That was a great 25-30 minute baseball scene at the end. Classic. Anyway, where was I, right, Joe West started to toss people. Four in all. From the same team, that didn’t even start the incident. Beckett was not tossed, but Torii Hunter was. Guess the reason. Give up? Yelling. Mickey Hatcher was next. The reason, yelling. Justin Speier was the third to go for the same reason. Manager Mike Scioscia decided to yell some more the following inning and of course he was going to follow suit. That set the tone for that boneheaded crew. 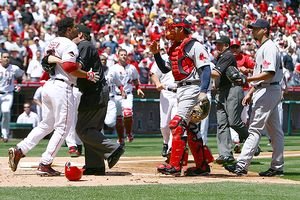 (Hey Josh, how about throwing it to Varitek, not my head)

Beckett’s quote is priceless. It’s right up there with Patrick Ewing’s during the 1999 NBA Lockout. “We make a lot of money, but we spend a lot of money to.” Beautiful. Here is Beckett’s, “I don’t really feel like I’ve done anything, I’m not sure what I’m supposed to do. Am I supposed to give him a hug? I wasn’t really in a hugging mood right then. I really don’t know what he wanted me to do.” Nothing wrong Josh? A guy almost got hit in the head. Did the sun blind you as you threw the ball towards his head? That’s one excuse you haven’t used yet. Again, I’m not calling him a head hunter, but this is not a case of the ball slipped or I didn’t have enough pine tar. Believe me, these guys aren’t hiding it. Who said you had to hug him? Here’s a thought. You made a mistake, own it and people will forgive. Maybe not right away, but they will. You did not have to throw the ball when time was given. Check the video for yourself. Six games is nothing. One freakin start. You sit the other five days anyway. This could’ve been avoided. You have a lot to learn there Becks. Joe, this doesn’t help your image. “Naked Gun” or not. Baseball needs to put pitchers on notice to. And they’ve done that starting with Josh Beckett.

One thought on “Beckett Needs to Wake Up”